Nobu Tartare With Caviar For Two

This week was my wife’s birthday, so I was thinking of what to make for her.  She hinted that she wanted lobsters, so I thought, “ok… steamed lobsters with jalapeno and spicy lemon dipping sauces.”.  But I needed to come up with an appetizer.  Matsuhisa’s tartare with caviar, I thought, might fit the bill; especially since I had a bit of leftover wasabi pepper sauce in the refridgerator from this weekend’s dinner.

The original recipe can be found in Nobu: The Cookbook (p. 133).  I didn’t stray too far from the recipe when I did this for my wife and I. For two people the ingredients came to:

Measured out the soy sauce for the tartare sauce

Added in the wasabi pepper sauce 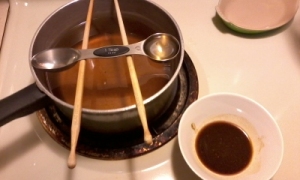 …and finished the sauce with the dashi

* For the tartare itself –
4 oz of toro fillet, in this case, I was using sushi-grade salmon
1 teaspoon finely minced onion (here, I used a cippolini)
1/2 teaspoon grated garlic
1 teaspoon osetra caviar/serving (for today it was a generous 1 1/2 teaspoons!)
menegi/chives for garnish 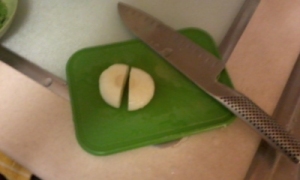 …I only needed half a cipollini… 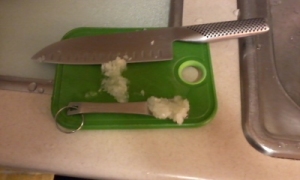 …which I minced up for the tartare

To make the dish –
1. mince the fish as finely as possible.  spread loosely on a plate and chill in the freezer for 10-15 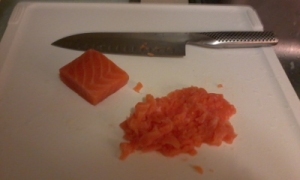 minced up 4 oz of salmon fillet as Nobu’s commented option; and I’ve also had it with hamachi during an omakase meal

minutes
2. working quickly, take the minced fish out and combine with the onion and garlic 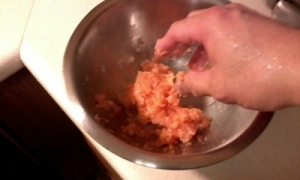 3. place caviar atop the tartare (and then the menegi, if using).

osetra caviar for the tartare

4. pour the sauce carefully into the side of the serving bowls so as not to  perturb the arrangement.

salmon and tang of the wasabi pepper sauce.  My wife noted that the flavors very much reminded her of the toro tartare omakase course she had at Matsuhisa.

This entry was posted on May 1, 2014, 8:20 am and is filed under Nobu At Home. You can follow any responses to this entry through RSS 2.0. You can leave a response, or trackback from your own site.