This is going to be a very difficult entry to write.

Based on the omakase dinner I had at Morimoto NYC 28 Dec 2019, I was thinking about trying to reproduce two dishes at my niece’s request. With just a couple of exceptions, I’ve had a yearly omakase at Morimoto NYC around the holidays. As some of you may know, https://ny.eater.com/2020/2/10/21131286/morimoto-closing-nyc-stephen-starr reported the closure of the restaurant scheduled for May 2020. https://www.crainsnewyork.com/food-beverage/iron-chef-morimotos-chelsea-restaurant-closing-spring reported that the last day of service would be 10 May 2020.

During the dinner, Omae-san and Chef Nate Horwitz mentioned this aegoromo used just simply tamari, ‘charred’ eggplant and thinned out with dashi. I was also told to generally avoid American tamari (“too much salt”). In preparation to reproduce this dish, I called the restaurant to ask Omae-san for a few quantity specifics. I was informed by the Morimoto NYC staff on 21 Feb 2020 at that Omae-san had left the company and returned to Japan. Omae-san, my spouse and I will miss our holiday dinners with you, and thank you for the past omakase meals that you have prepared for us.

What got my attention about this eighth course offering was its delicious simplicity using just a handful of ingredients and, in particular, the aegoromo.   And so I thought I would try to pair a simply roasted chilean seabass (or black cod) with the other dish elements.  With all that being said, I found some guidance in preparing the aegoromo (eggplant puree sauce) from Murata-sama of Kikunoi: https://www.nhk.or.jp/dwc/food/recipe/kyou_18689.html.  Additional information on the web

a touch more than 8oz of eggplant with calyx removed

suggested roasting the eggplant at 338 degrees F for about 20 minutes and letting it cool so I could scoop out the eggplant interior.  I would season the puree with about 1/2 T of Mitoku Yaemon Tamari (I calculated that it would be equivalent to 1/4 t salt) and then thin it with a little dashi as was told to me by Omae-san.  But how much eggplant.   Understanding that 1/4t was enough to season a cup of water, I thought may be 8 oz of pureed eggplant enough for this dish (4 oz portion per person). 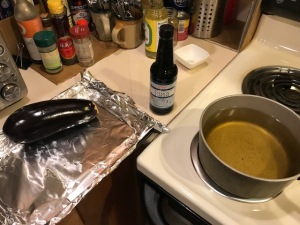 So it would seem that I would have to combine:

Based on what I read over at https://www.thekitchn.com/5-ways-to-use-charred-eggplant-233335 , piercing the eggplant all over 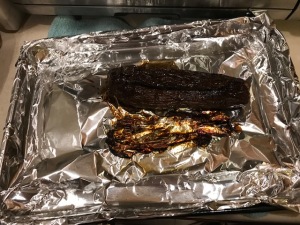 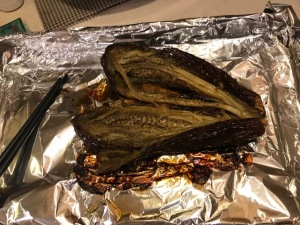 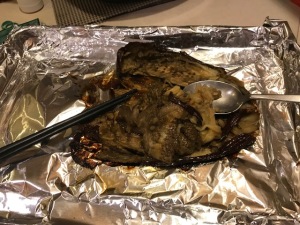 easily scooped out into a food processor. 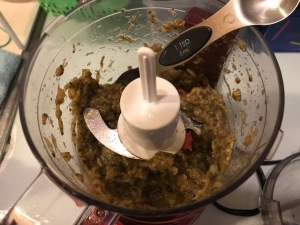 eggplant flesh pureed with a teaspoon of dashi

Once the eggplant was placed into the food processor, a teaspoon of dashi was added to help the puree process and to add a bit of 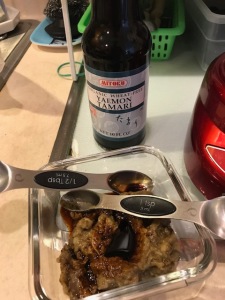 Adding the seasoning as recommended by Omae-san

umami.  Once the puree was made, it was transferred to a small container and I added in the tamari. 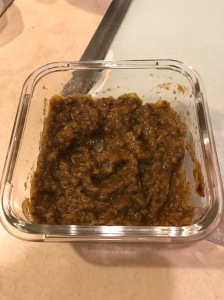 After mixing in the last ingredient, the resulting puree seemed to have the right color and texture to the item I was served during the omakase meal.  At that point, I set it aside, I blanched some fresh asparagus and roasted a bit of chilean seabass that was seasoned with 3 or 4 3-finger pinches of 4:1 salt/pepper mix.  The fish was roasted at 475 degress F.  The plating began with a mound of 2 heaping tablespoons of the eggplant puree that was then smeared across the plate.  Atop the puree went the roasted 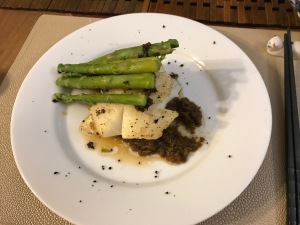 chilean seabass, and a grating of half a fresh black truffle. To garnish the dish, on went 6 sticks of blanched asparagus.  When we tasted the dish, my wife looked up and said ‘delicious, same flavors as Omae-san made for us!’.  She clearly cleaned her plate.  I think that really said it all.  I could also see making this dish with roasted black cod.  I think if I make this again, I think I would double the amount of eggplant.

Omae-san, thank you again for the past omakase meals that you have prepared for us. Thank you for explaining this dish to me so that I could try to make it at home.

This entry was posted on March 4, 2020, 9:05 pm and is filed under Morimoto At Home. You can follow any responses to this entry through RSS 2.0. You can leave a response, or trackback from your own site.