As I was thinking about possibly making Blue Dragon’s Buttermilk Tempura Chicken at home, I immediately wondered what side I wanted to go along with it.   One of the classic items is cole slaw, so I found:

that contained Chef Tsai’s recipe for his version of slaw.  A microbatch of the slaw would turn out to be:

The recipe couldn’t be simpler.  I just needed to whisk up the seasonings and then toss the seasoning mix into the finely cut up vegetables.   Chef Tsai suggests refridgerating the slaw for about 15 minutes to allow the vegetables to slightly soften.

So I began by zesting a lemon

Now it was now just a matter of mixing in the rest of the ‘slaw’ vinaigrette with the chili garlic sauce, dijon mustard, 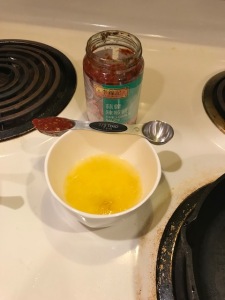 Adding in the dijon mustard

correcting the seasoning with 4:1 salt/pepper mix 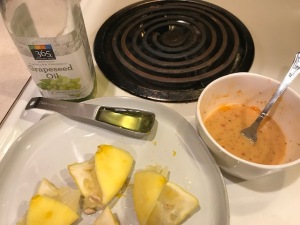 mixing in the grapeseed oil after dissolving the salt/pepper mix

The vinaigrette also required a fine mince of white/light scallion.  So I got a half bunch of scallions de-rooted and cleaned.

scallions for the slaw

I minced up the scallions and carefully segregated the dark and light/white green parts. 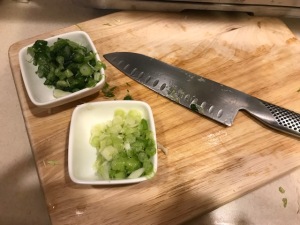 In the meantime, I finally shredded/chiffonaded part of a cabbage to the amount of about 2 cups.

Additionally, I cleaned a small head of raddichio and took about 5 out of the 10 leaves from that head.

half head of raddichio…

Like the cabbage, I finally chiffonaded the raddichio leaves which came to about 1 1/3 cups. 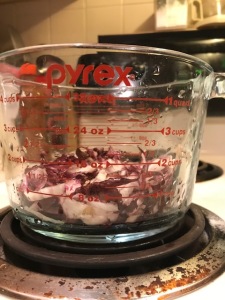 …which came to 1 1/3 cup of finely chiffonaded raddichio

To begin assembling the slaw, I added the finely minced scallion whites to the vinaigrette.

Now it was just a matter of combining the rest of the prepared vegetables in a mixing bowl,

along with some pre-prepared shredded carrots.

The slaw was finished by adding in the vinaigrette and mixed the bowl’s contents so everything was easily seasoned.

….and it was added to a plate of Blue Dragon Buttermilk Tempura Chicken!

This entry was posted on October 20, 2019, 12:20 pm and is filed under MingTsai At Home. You can follow any responses to this entry through RSS 2.0. You can leave a response, or trackback from your own site.