I was thinking about doing a ‘small plates’ dinner this weekend. Browsing through my copy of World Of Nobu, I settled on trying an ‘approachable’ dish which was more about applying what I’d learned rather than trying to figure out measurements (but of course, I would be recording the amounts I used here, per se).  The recipe I decided to try was the Roasted Miso Cauliflower (p 136).  It’s a little bit of a misnomer, since there’s romanesco broccoli in the dish and Chef Hideki Maeda @ Nobu London suggests that other crunchy vegetables could be used for this.

Basically this dish is about slicing up the cauliflower florets into, what appears to be, 1/4″ thick slices.  Once that’s done, marinate the slices in Nobu Saikyo Miso for about 2-3 hours. Chef Maeda admonishes not to leave it in the marinade too much longer than that else the vegetables would become ‘pickled’.  As near as I can tell from the picture in the book, when the vegetables are removed from the marinade, one should probably use one’s fingers to wipe the marinade off vegetables as best they can and then sear the vegetables in a (non stick) frying pan until golden brown (50% max heat?).  At that point, the vegetables are placed on to a non-stick foil lined baking tray to cook in preheated “medium hot” oven for about 3-5 minutes.

But what temperature to use?  Nobu Miami: The Party Cookbook suggests 480 degrees F (Roasted Broccoli And Cauliflower, p. 98). Nobu: The Vegetarian Cookbook suggests 430 degrees F (Roasted Vegetable Pintxos, p. 25, Oven Roasted Turnips, p. 78) and 480 degrees F for the Toban Roasted Vegetables (p.39).   Since there might still be some miso clinging to the marinated vegetables, I opted for the lower 430 degrees so as not to burn the cauliflower/broccoli.

Cauliflower and broccoli floret crowns for the dish

I gathered that plating was a matter of laying out the slices of the miso marinated cauliflower, ‘sprinkling’ some yuzu juice over the vegetables (I bet 1 t would be enough).  To garnish, each piece would be topped with a thinly sliced jalapeno round, followed by a sprinkling of pine nuts and the ito-togarashi (dried chili pepper threads) on top.  So I wasn’t able to get my hands on the ito-togarashi, but I thought a sprinkle of shichimi togarashi might be a good substitute.  I would skip the pine nuts this time since I was still recovering from dental surgery (ordered to stay away from chips/crisps, nuts, etc).  As it would also turn out, I wasn’t able to get my hands on romanesco so I had to settle for some regular broccoli.

So for this attempt, I assembled 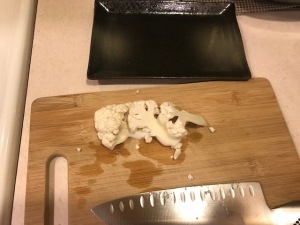 into a zip sealed plastic bag to sit and marinate for 3 hours.

Estimating the portioning for 1 plating of the recipe

Once I had all vegetables cut up, I got them into a ziplock bag and poured into the miso over them and tried to get them evenly coated.  Since I was only going to be marinating them for a short period of time,

I let them sit on my kitchen counter at room temperature for about 2 hours. 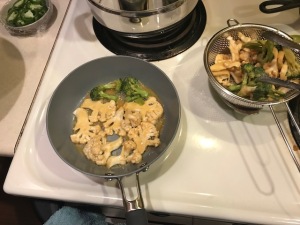 While I was waiting, I prepared a baking tray lined with non-stick foil (remember this is Nobu Saikyo Miso, so there was a distinct possibility that the vegetables might stick to the cooking tray).  I also took the time to wash, destem and slice a jalapeno into thin rings as garnish for the dish.

jalapeno rings as part of the garnish

At the end of the marinating time, I drained off the marinade and seared the vegetables in about 3 batches in my non-stick pan (no oil) and transferred each batch to my baking tray to cook in the preheated countertop oven (430 degrees F) for about 5 minutes.

While vegetables were in the oven, I assembled my garnishes.   Once the vegetables were cooked, I got them placed on my ‘sushi’ plates with alternating cauliflower and broccoli.  I drizzled a teaspoon of yuzu juice along each row of vegetables

In terms of portioning, I think if I were to do this again, I would use a half order of the recipe if this were to be a course offering in a larger omakase-style meal at home for the holidays.  Thank you Chef Hideki Maeda and Matsuhisa-sama for sharing this very approachable offering.  It’s nice to have something like this that I could make for my vegan friends.

This entry was posted on August 19, 2019, 10:12 pm and is filed under Nobu At Home. You can follow any responses to this entry through RSS 2.0. You can leave a response, or trackback from your own site.