I recently came across:  https://hikarimiso.com/recipes/chef-nobu/seared-tuna-vinegar-miso-dressing/

but the hikarimiso website calls for 5oz of regular miso (which came to about 6T + 2 t). With the addition of that recipe’s vinegar that came to 7 T plus the pinch of dry mustard powder.  Additionally, the hikarimiso website indicates the amount of ceviche sauce is actually a half portion of the ceviche sauce recipe from Nobu: The Cookbook (p. 170) 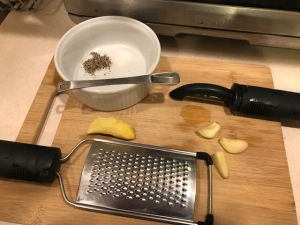 portioning out equal amounts of salt, black pepper and rounding up the ginger and garlic…

So it would appear the recipe for the sauce would be (estimated): 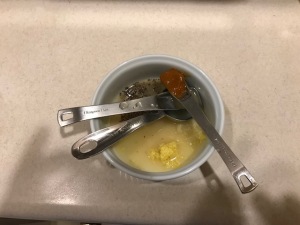 Adding most of the ceviche sauce ingredients together… 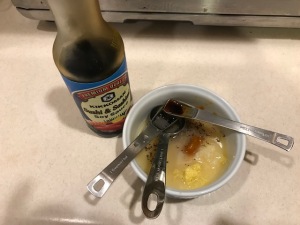 with just that touch of soy sauce 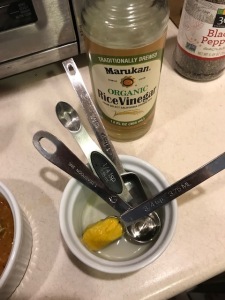 combining the rice vinegar and mustard paste (…boy it’s going to be yellow!)

…and then all that Nobu Saikyo miso

and then blend in the 2 t of grapeseed oil 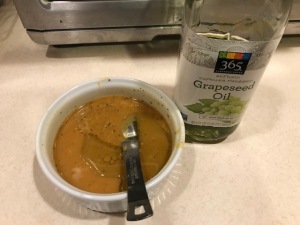 finishing up with that dash of oil as a dressing

So for this dish, I was not going to sashimi, but dress the seared/medium rare kampachi with the sauce, and garnish it with the cherry 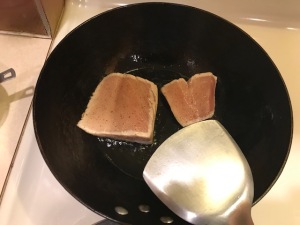 kampachi seasoned with 2 pinches of 4:1 salt/pepper mix. Searing the sides and then cooking the major sides on 50% max heat about 2-3 minutes each

tomatoes, shaved red onion and some half hollowed cylinders of persian cucumbers upon which to mount the kampachi. 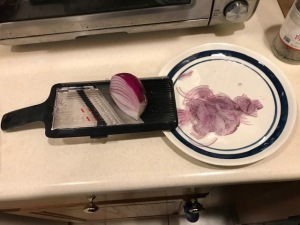 Once the fish was done, I plated four pieces from each cucumber (cut side down) to serve as a mount for the kampachi, topped it with a

piece of kampachi and then pour about 3 tablespoons of the dressing over the fish.  At that point a few pinches of the shredded red

onion went atop the dressed fish.  It was then just a matter of getting some halved cherry tomtoes on the dish and sprinking it with a teaspoon of dry miso.

My wife was a bit skeptical about the combination of the Nobu Saikyo Miso and the ceviche sauce with the rest of the dish elements and looked up very surprised after the combined first bite of fish, miso ceviche and red onion.  She commented how well the flavors were balanced and it had the right acidic punch to the richness of the kampachi.  It should be noted that the Matsuhisa version of the recipe from hikarimiso uses toro (tuna belly).   My guess is that this miso ceviche dressing can be used with rich fish such as salmon, chilean seabass and black cod.

Thank you Chef Matsuyoshi and Matsuhisa-sama for sharing your views on this recipe!

This entry was posted on August 9, 2019, 2:40 pm and is filed under Nobu At Home. You can follow any responses to this entry through RSS 2.0. You can leave a response, or trackback from your own site.