Many years ago, I had the great fortune to visit Barcelona just before the start of 25th Olympic Games.  I was there, ostensibly, to study the works of Antonio Gaudi.  While there, I got the opportunity to have dinner at Restaurant L’Olivé (there’s a picture of the pa amb tomaquet from the restaurant in the May 1992 Gourmet, p.171) and Restaurant 7 Portes.  One of the very first things I was served was pa amb tomàquet – a simple umami bread bomb – as a starter.    Since then, I’ve tried to make it on and off with commerical bread, a peasant boule, a baguette…. nothing quite seem to match.   With the recipe from Miramar Torres, I was thinking of trying it once more.  Pa amb tomàquet is simply described as a toasted wedge of bread, rubbed with (optionally cut garlic), freshly cut tomato halves, olive oil and salt.  Every time I tried to make it, I could never quite get that nice layer of tomato pulp on the top of the bread that I saw in the version from her book (The Catalan Country Kitchen, p. 41) was:

(and that was to serve 4 people)

After thinking about this problem and researching about on the web, J. Kenji Lopez-Alt suggested: …Cut a tomato in half and rub the cut

Preparing the tomatoes as a topping

surface over a box grater, keeping the palm of your hand completely flat. This conveniently extracts and chops the tomato pulp, completely 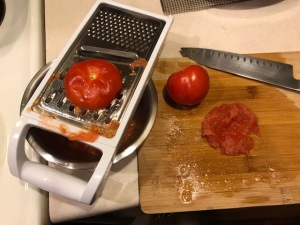 separating it from the skin, which you can then discard… (https://www.seriouseats.com/2015/09/how-to-make-pan-con-tomate.html).  It

pre-grated garlic and tomatoes as the pa amb tomaquet topping

occurred to me to also apply a trick from Nobu to spread grated garlic over the slices of crispy toasted bread, layer on the grated

tomato, drizzle over the olive oil and then sprinkle with sea salt in the same manner that Chef Thomas Keller would season a roasted

…topped with grated tomato and its juices

My wife was skeptical that this bread spread with garlic and tomato would be anything interesting.  This was as much an eye opener for her as it was for me all those years ago when I first had dinner at L’Olive in Barcelona.  Perhaps this would serve as potential ‘bread course’ offering for a tasting menu dinner.  It was a nice accompaniment to an Easter dinner of grilled lamb, green beans and Romesco L’Olive!

This entry was posted on April 22, 2019, 7:37 pm and is filed under Fundamentals, HomeCooking. You can follow any responses to this entry through RSS 2.0. You can leave a response, or trackback from your own site.