Given all the hustle bustle associated with the holiday season, I thought I would try to make a little comfort food to let off a little steam.  Knowing how my wife loved pasta, I came across David Chang’s Ginger Scallion Noodles from his Momofuku book (p. 56, 57).  The dish was stunningly easy, the real effort was in making the Momofuku Ginger Scallion sauce.  The dish itself was 1 tablespoon of ginger scallion sauce to every ounce of cooked ramen and then top with whatever you wanted (Chef Chang suggested some of his bamboo shoots, quick pickled cucumbers, pan  roasted slightly browned cauliflower, a pile of sliced scallions and some toasted nori).   In this case, I had some leftover takeout ginger scallion lamb from a local Chinese restaurant that I could use to top the noodles.  The original recipe can be found online here: https://www.saveur.com/article/Recipes/Ginger-Scallion-Noodles

Perfect. So in making the ginger scallion noodles, I scaled the original recipe for the sauce down to:

peeled ginger to be grated

Starting to mince up the scallions

The sauce seemed to have very little oil for these raw ingredients, so I chose to pan sear the minced scallions and ginger in a little 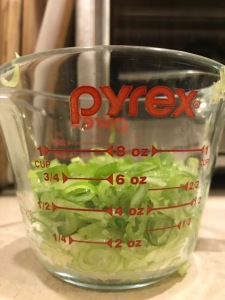 grapeseed oil to release their aromatics and then mixed in all the other listed ingredients.

Now all that was left was to add the remaining seasonings.

the original neutral oil in the recipe

In went the original microbatch amount of oil

Now a touch of the sherry vinegar to cut the richness 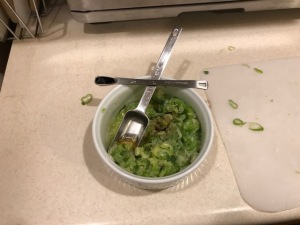 and finally the usukuchi soy sauce

and then a soy sauce to add a little umami to the recipe. 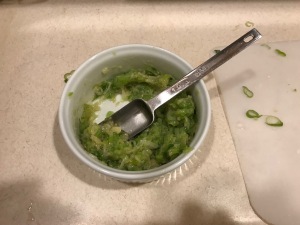 At that point, I set the sauce aside to cool to room temperature and let all the elements blend.  Chef Chang suggested waiting at least 15-20 minutes before using and that it would keep for a day or two in the refridgerator.

Once the sauce was ready to use, I reheated the leftover lamb with ginger and scallion and my wife wilted some lettuce greens.  In the 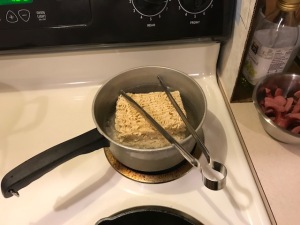 cooking up some ramen

meantime, we cooked up some ramen and then began plating. 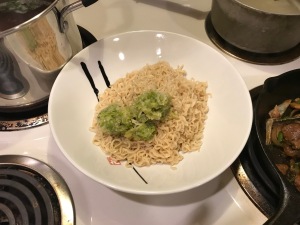 Once the noodles and the ginger scallion sauce had been sufficiently mixed together, on went the leftovers and the lettuce. 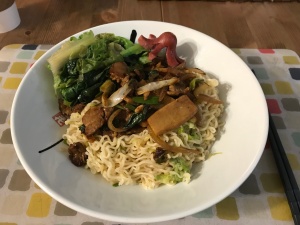 Upon tasting, my instincts were right about connecting the leftovers with the ginger scallion noodles (obviously, if this were to be a vegan dish, I’d substitute in some of Chef Chang’s ingredients and perhaps crisp deep fried tofu).  My wife and I agreed about the strong ginger presence in the dish and our perception that the sauce sufficiently seasoned the dish.  Extra soy sauce and salt were NOT needed for these noodles.  Perhaps this dish could be part of a tasting menu course, coiled up and served in a tasting spoon, much like the French Laundry’s concept of Linguine And White Clam Sauce served on a clam shell.

This entry was posted on December 21, 2018, 9:30 pm and is filed under DavidChang At Home. You can follow any responses to this entry through RSS 2.0. You can leave a response, or trackback from your own site.