So I came across this the other day: https://www.dmagazine.com/food-drink/2010/12/if-you-cant-get-to-nobu-try-chef-rasos-lamb-recipe-at-home/

I was intrigued to try this over Labor Day weekend since I’d seen this on the Nobu menus (and associated with lamb and prime rib [Nobu Manila]) for the last several years.  But looking at the rosemary miso recipe seemed rather unwieldy for a home cook like myself so I decided to translate the recipe as a half-batch, relative to table/tea spoons –

…and as it would turn out the half batch of rosemary would be 4.5g (5g) or1/8 oz of fresh picked rosemary leaves.

yamajirushi shiro miso for the sauce

the garlic, miso and olive oil in a blender (food processor) until smooth.

In order to make the blending process go easier, I brought the miso up to room temperature

olive oil, garlic and miso blended before the addition of fresh rosemary

Empty the contents of the blender to a bowl and stir in the mirin and vinegar.

vinegar for the sauce (su miso?)

mirin for the sauce

When I first tried to make this, I made the mistake, assuming I could help the process along by pre-mincing the rosemary. WRONG.  As I discovered, even though I determined the equivalent measurement of the rosemary was 2 teaspoons, minced, the rosemary apparently started the seriously oxidize before I added it turn the garlic miso olive oil base. I didn’t get the jade/green like color I was expecting to see.  So, I attempted to remake the sauce, added whole picked rosemary leaves.   Again, this didn’t seem to work – all I got were flecks or rosemary green distributed throughout the miso base.   So I considered one more tack.   What if I ground the rosemary leaves with

Into the food processor with the miso garlic base

containing the miso base?  As it would turn out, the third time was the charm.  Hand grinding the rosemary gave me the visual and

Nobu Rosemary Miso, with the remaining mirin and vinegar blended in.  Now THAT was the color for which I was looking!

aromatic attributes!  So now I could imagine the dish I was going to make based on the one from Nobu Washington DC: 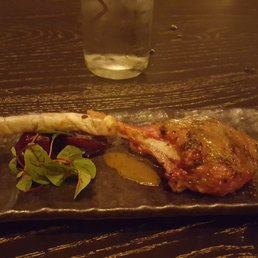 So now that I had the rosemary miso, I was thinking of making a steak with shishito peppers, baby carrots and rosemary miso!

So instead of making the original sauce tonight that required:

my wife suggested ‘painting’ the steak with the rosemary miso, much like the offering from Nobu Honolulu:

The sauce had a ‘spicy’ component, probably from the fresh grated garlic as well as the piney aromatic distinctive lemony vegetal flavors of the rosemary along with the creamy salt umami flavor of the miso.  What was surprising was it didn’t seem as sweet as I had expected from the inclusion of the mirin.  Clearly this ‘sauce’ would be paired with rich strongly flavored protein choices.  And while I thought the sauce was very well balanced (and suggesting the proteins in question would NOT need as much salt for seasoning before cooking), my wife thought that the sauce could use MORE garlic and MORE rosemary.  I expect I could increase the garlic to 2 t.  I will have to experiment to find the right amount of rosemary for my wife’s taste.  The simple fact that a request to increase those two elements clearly suggested that this sauce is a keeper and I’ll update here the adjusted amounts when I discover the combination my wife enjoys.

This entry was posted on September 9, 2018, 10:00 pm and is filed under Nobu At Home. You can follow any responses to this entry through RSS 2.0. You can leave a response, or trackback from your own site.