In 2004, the season finale of Iron Chef America//Battle Of The Masters featured a dish from Iron Chef Sakai which was potato  wrapped langoustines with pan grilled green onion and sauce americaine ( http://www.geocities.ws/gsnnreality/ironchef/index ).  Nine years later I would see another version of this dish at Menton using kataifi with Top Chef winner Kristin Kish at the helm.

Over the years, I’ve been wanting to try this dish and now I felt I was in a position to attempt it. Some years back, I managed to get a hold of the Benriner spiral slicer that Iron Chef Sakai had used to shred the potatoes into ‘noodles’ to wrap around the langoustine.  Obviously langoustines are not a common ingredient (though they usually have it over at Boston’s Eataly’s fish counter on weekends).  Since I knew the nobashi technique for preparing shrimp, I thought I’d give the dish a go with the colossal shrimp that I could get a HMart.

So during the course of a prior week, my wife had gotten some fresh shrimp which I shelled for a dinner; but I saved the shells to make shrimp stock as a base for the sauce americaine.  After my wife headed out to help my mother-in-law, I decided to see if I could make this during the 6 weeks that she would be gone.  So I went to Ebisuya to get the tokyo negi and to HMart to get the colassal shrimp and russet potato.

To prepare the dish, I needed to make a half portion of the sauce americaine – so I had to combine

I needed to cook down the shallots, cognac, stock and then strain out the solids and then combine the cream, butter, salt/pepper and few drops of truffle oil and set aside/kept warm.

I then needed to do was to separate out the green part of the tokyo negi and make the nobashi shrimp (and season the shrimp with several three pinches of 4:1 salt/pepper mix). 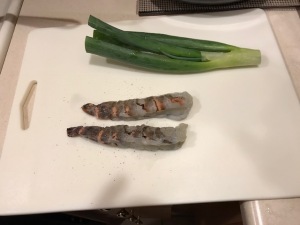 Using a small russet potato, I washed, peeled it and then mounted it into the Benriner spiral slicer.

Preparing to make the potato ‘noodle’ strands to wrap the shrimp

Once I made the potato strands, I soaked it (A MISTAKE). 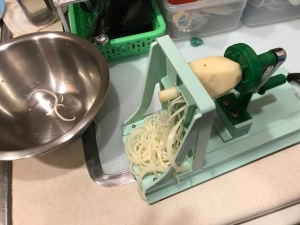 turn that crank to make the potato ‘noodles’

As it would turn out, it would make the potato strands brittle and the strands would break as I would try to wrap the shrimp from tail

to front.   Fortunately, I had bought three potatoes, so I tried wrapping the shrimp with the non-soaked potato ‘noodles’.  For whatever the reason, those strands had more flexibility for wrapping.   So when I started wrapping a strand around the shrimp, I would wrap a strand a little bit along the shrimp body and then cross wrap the strand over that started strand along the body.  If I ran out of a strand, I would start another strand over the one that ran out.  That would suggest that I would probably have to get a bigger russet potato to cut longer strands (something I need to keep in mind in the future).  Once I wrapped to the front of the 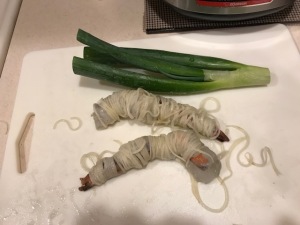 Interestingly, the nobashi seemed to curl a little bit after being wrapped by the potato

shrimp, I would try to tuck the last bit of the strand/noodle underneath the last few wrappings – sort of like finishing the wrap of a katana tsuka.

I got out my large All Clad skillet, got it heated up, then lowered the heat to 50% max power and added several tablespoons (4-5) to cover the surface and then added the potato wrapped shrimp.   I tried not to move it for about 3 to 4  minutes so as to get the potato nice and crispy (as I did for the darphin potato dish) and then turned it over for another 3 to 4 minutes.  Once I had flipped the shrimp, I added the tokyo negi greens to the pan which I flipped after about 2 minutes.

Before plating, I ‘painted’ my dish with the sauce americaine, transferred the cooked tokyo negi greens and then topped the tokyo

negi with the golden brown crispy potato wrapped shrimp, much as Iron Chef Sakai had during the Iron Chef America battle.  On tasting it, all the expected flavors were there with the nice textural crunch of the potato wrapping.  And while it was clear the shrimp was properly cooked through, the potato area of the belly area of one of the shrimp was slightly undercooked.  This made me think about finding a way of keeping the nobashi shrimp perfectly straight so that I could cook ALL sides of the shrimp.

I’m going to make this dish again, when my wife returns from her trip.  I am now convinced more than ever that I think I made the right choice for including this as a course for my holiday meal.  Thank you, Iron Chef Sakai for presenting this idea in your Iron Chef America battle.

This entry was posted on July 6, 2018, 11:33 pm and is filed under Menton, Boston, Sakai At Home. You can follow any responses to this entry through RSS 2.0. You can leave a response, or trackback from your own site.