Here’s a video of Jacques Pepin making the darphin potatoes:

Because of my wife’s issues with heated butter, I thought I’d try making a microbatch of Pepin’s darphin potatoes with grapeseed oil.

The microbatch version of his recipe would use:

So I began by peeling and soaking a russet potato before preparing my scallions.

scallions for the microbatch recipe

mincing it for the recipe.

At that point, I needed to grate the potatoes and get them into cold water so that they wouldn’t discolor. I let

Grated russet, drained with the minced scallion and 3/4 teaspoon of 2:1 salt/pepper mix

shredded potato sit for a couple minutes while I pulled together 3/4 teaspoons of the 2:1 salt/pepper mix.  The potatoes were then drained and the ingredients were combined and hand mixed to make sure the elements were evenly distributed.   I divided the mixed potato in half so that I could cook them in two individual skillets to see how they would turn out as separate portions. 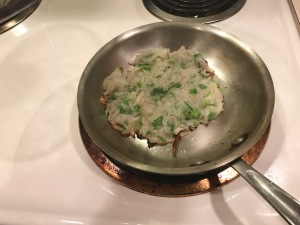 Half portion searing in one skillet

I began with a very hot pans (max heat) with grapeseed oil, added the potato mixture and turned it down half power and seared for about 2 minutes.  I then lowered the heat down to about 36% power and cooked covered for about 12 minutes.

After the 12 minutes had gone by, I uncovered the pan and wrist-flipped the darphin potatoes and re-covered the pans to cook for another 10 minutes.   I rather imagine cooking the potatoes covered gave them a chance to ‘steam cook’.  While all that was going on, I had popped boned seasoned chicken thighs into the over to roast and blanched a bunch of haricots vert to go along with the darphin potatoes.

As it would turn out, the darphin potatoes did indeed slide out easily onto my dinner plates and I combined it with my chicken and haricots vert.   Upon tasting, my wife loved the crisp doneness of the potatoes and how it paired with the chicken and beans.  The only comment she made was that she thought the darphin potatoes were overseasoned.  So, the next time I make this, I’ll cut the salt/pepper amount in half and make this batch in a single skillet.

All in all, I think I’ll use the darphin potatoes for the holiday meal when I pair it with boned crisp roasted turkey thighs.   Now if I can figure out how to make good turkey gravy to go with that meal….

This entry was posted on January 7, 2018, 12:45 pm and is filed under Fundamentals, HomeCooking, Pepin At Home, Robuchon At Home. You can follow any responses to this entry through RSS 2.0. You can leave a response, or trackback from your own site.