One of the projects that I’ve been intrigued about since its appearance was the Matsuhisa/Nobu mini tacos.  While it’s pretty obvious how to fill them based on the Nobu’s Vegetarian Cookbook (pgs 86, 87, 165),  what I really needed to do was to figure out how to make the fried(baked?) mini taco shells formed from 8 cm (3.15 inches) diameter tortillas (see: http://www.foodfashionista.com/2009/01/nobus-sashimi-taco-recipe.html ). Both resources indicated frying taco shells but not how to make them.  Yellow corn mini taco shells for purchase didn’t seem to be readily available in my area.

So to make fresh yellow corn tortillas for the taco shells, I was guided by Chef Bayless’ recipe for yellow corn tortillas (see http://www.rickbayless.com/recipe/corn-tortillas/ ). I called ahead and discovered that La Chapincita Market in Waltham, MA had small packages of yellow maseca (masa harina flour?) for me to try this project.

Chef Bayless’ recipe makes 15 5-6″ tortillas; I wanted to make tortilla’s half that size, so I was thinking of cutting the recipe down by half so that it would be:

and then letting it stand for 15 minutes as directed.  What I was thinking of doing was pressing out enough dough thin enough (may be 1/16″) between two plastic sheets. I then could use a 3″ diameter pastry cutter to get my necessary mini tortillas for frying (baking?).

I was thinking, perhaps, creating the mini taco shells by lightly spraying them with a touch of oil and then draping them over a non-stick aluminum foil wrapped metal mold to bake in an oven.  But how large of a (half?) pipe would I need as a mold to address the creation of the mini taco shell?  In any event, that solution seemed rather unsatisfying.  I then recalled a comment that an Iron Chef needed to be resourceful.  Spending sometime scanning the web, I came across the following solution – cutting up an aluminum roasting tray/aluminum foil disposable cookie sheet to fit my needs – see: http://kdvr.com/2014/01/15/mini-wonton-tacos/ – in particular: use an aluminum foil disposable cookie sheet and mold into a “V” shaped wedge (See time indices 1:08-1:21). It would then just be a matter of baking the tortillas at 375 degrees F for about 10 minutes to get the desired result.

So I wandered over to my local Star Market and got a pair of cookie sheets (they come as a set don’t you know…). 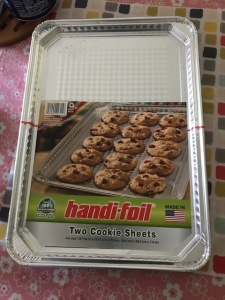 Aluminum cookie sheet to be transformed into a mini taco mold

But how to mold the sheet with the right dimensions for a 3″ tortilla? Looking around my pantry, I spotted a new bottle 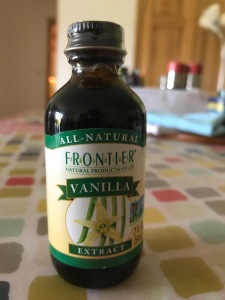 A bottle with the right cylindrical dimensions to mold the foil form around…..

of vanilla extract whose cylindrical properties seemed to have the right dimensions (a little more that 1 1/4″).  So that’s what I’d use to mold the aluminum sheets.  So to begin, I took a sheet and tried to fit it to the tray with which I was going to be using to bake the tortilla.

Trying to fit the overall sheet to the pan

I then did a rough cut focusing on the flat part of the sheet . 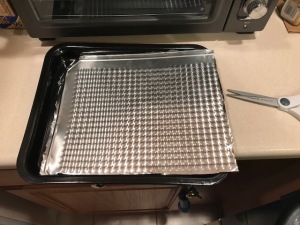 I then manage to measure out 2 3″ wide strips that I was going to wrap around the vanilla bottle to get that mold I wanted for the taco shell. 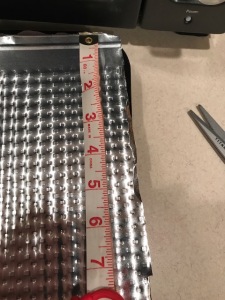 The mini taco shells are about 3″ in diameter,  so need to cut a 3″ wide strip(s) to mold from the sheet

Once I got the molds formed, I placed them back into the pan and did a little more trimming so that the molds would fit comfortably in the pan. 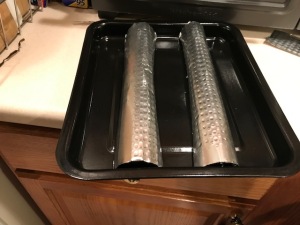 So to test my cooking harness model, I needed to make a microbatch of the tortilla dough which meant mixing up:

maseca masa harina for the microbatch 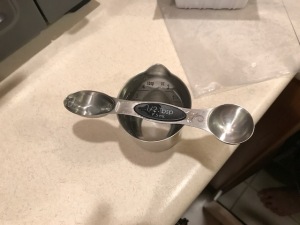 Tortilla dough ready to sit for a bit (15+ minutes)

Once the dough had time to rest, I took a large walnut sized bit and rolled it into a ball and then placed it onto the plastic

rolling a bit of dough for the tortilla

sheet, covered with another plastic sheet to be evenly flattened into a disc.   These plastic sheets I used for flattening the

Plastic sheeting to press the fresh tortilla as thinly as possible

dough balls were cut out from a large ziploc bag.

Getting ready to form the tortilla disk

So I slightly flattened the ball of dough, placed it between the sheets.   Since I didn’t have a tortilla press, I did the

resourceful thing and used one of my ironclad frying pans to evenly applied flattening pressure to the tortilla dough.

Now that I had the tortilla shape, I just needed to cleanly cut into the 3″ diameter shape that I wanted.  So for that, I got out my pastry cutting rounds.

I removed the top plastic sheet, pushed the 3″ pastry cutter into the dough and removed the dough external to the shell I wanted (saving the dough to be reused again in the another tortilla).

Cutting out a clean disk and removing the trimmings

At that point, I followed Chef Bayless’ instruction to lift the plastic sheet holding the tortilla round onto my right hand

A completed tortilla round

which I carefully transferred to my baking sheet with the taco mold.  I then laid the tortilla onto the mold and repeated 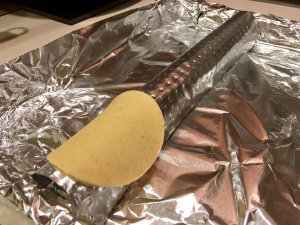 Draping the tortilla onto the mold

the process twice more. Three tortillas fit onto the mold and were given a light coating of canola oil spray and popped into the preheated 375 F degree countertop oven for 10 minutes (it would turn out it would take about 20).  When they were done, it was clear they had detached themselves from the mold.  I gingerly took them out and got them onto a paper napkin lined dish to let cool.

My wife and I took a quick taste and agreed that there was a nice strong corn flavor – sort of like a little corn cracker.  I decided to take one more round of making these shells and this time, I rolled out the tortilla so that it would be a bit 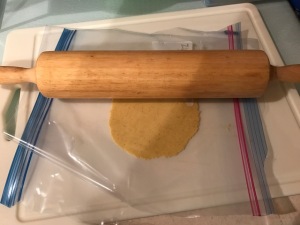 a thinner tortilla this time…?

thinner.  In making this last thinner batch, the cooking time was 15 minutes. 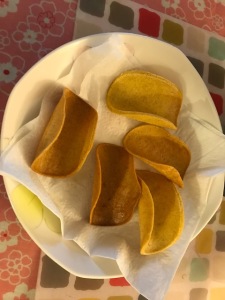 Thinner and slightly darker taco shells added to the mix.

Re-tasting the thinner taco shells, my wife thought they turned out closer to her expectations.  Now I would be ready to take on the rest of the Matsuhisa/Nobu mini taco menu item….!   As it turns out, the microbatch version I made for this test was more than enough for making the mini taco shells for a two person appetizer (3/person to be filled).  Now that I know how to make these taco shells, it also became obvious that it wasn’t much of a stretch to make home made tortilla chips for a gathering.   Chef Bayless, thank you for sharing your recipe and techniques for making yellow corn tortillas.

The microbatch amount made 12 3″ mini tacos

This entry was posted on October 7, 2017, 5:11 pm and is filed under Fundamentals, HomeCooking. You can follow any responses to this entry through RSS 2.0. You can leave a response, or trackback from your own site.