During the planning for my Christmas meal, I was wondering what to do about a seafood course.  At one point I had considered lobster.  But given the time constraints of what I had in mind, I went from lobster with sauce americaine, to Iron Chef Sakai’s Seaweed Steamed Lobster to his Seaweed Steamed Snapper With Tomato Oil Sauce.  I had recently seen a dish listed on the menu at Per Se just after Thanksgiving 2016 using monkfish and I’d remembered that monkfish was sometimes considered as poor-man’s lobster.  And so I decided that Monkfish with Sakai’s Tomato Oil Sauce with perhaps crisp garlic chips and chives as garnish might fit the bill.  The tomato oil sauce can be found online here: 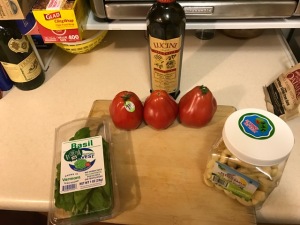 The sauce was basically built from a concasse of 3 tomatoes and a teaspoon of garlic (minced, and I would grate them instead) 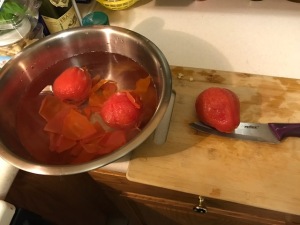 pomodoro sauce from Nobu Now). So to begin, I prepared three tomatoes by blanching them to remove their skins, split

them open to get as much as the seeds out and finely diced them for use in a sauce (think concasse).  Instead of mincing up 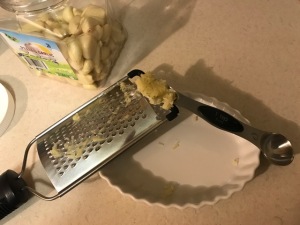 grated garlic for the sauce 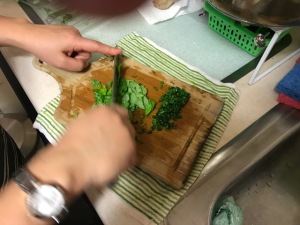 …she helped me out by preparing the basil…

the garlic, I relied on grating it to make sure it blended well into the sauce.  My wife kindly helped out by mincing up 2 tablespoons of fresh basil. 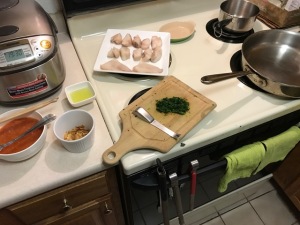 minced basil ready for the sauce

So I then got 4 tablespoons of good extra virgin olive oil into a hot sauce pot, turned the heat down to medium and then added the garlic.  I added

simmering the tomato oil sauce before the freshed minced basil 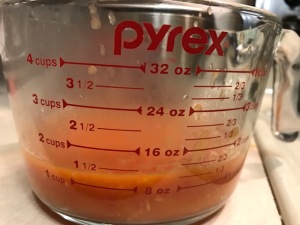 Checking on the sauce yield

in.  I moved the cooked sauce to a measuring cup so I could estimate how to season the sauce.  As it would turn out, it was about a cup and a third which meant it was going to be a little more that 1/4 teaspoon of 4:1 salt/pepper mix.  Because it was 1/3 cup more, I thought to add 1/8 teaspoon more of the 4:1 salt/pepper mix.  Back into the sauce pot the sauce went to simmer and I turned my attention to making the thinly sliced garlic

chips a la Nobu  using about 7 cloves of garlic fried in grapeseed oil.  When that was done, I re-checked my sauce, took it off the heat and stirred in the minced basil and set it aside before use with the cooked monkfish.

For the monkfish medallions, I cut them from 2 6 oz fillets into 1″ rounds (think scallops) and seasoned them with 4:1 salt/white pepper mix (Chef Keller is really clear on this point – he only uses white pepper with fish, not black).  Into a large preheated (very) hot skillet, I added about 3 tablespoons of grapeseed oil and proceeded to place the medallions in the pan going around in a clockwise circle – that’s how I would know the

order when/which pieces were to be turned over.  I turned the heat down to 50% max power and seared the first side for about 4 minutes (think 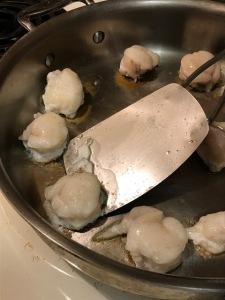 flipping the medallions to the other side

searing diver scallops) and then turned them over to cook for another 3 until just cooked through.  Once the fish was done, I began plating by

The start of plating

running a line of the tomato oil sauce down the center of the plate.  I finished up by lining medallions atop the sauce and then covering the fish

A line of medallions on the sauce, topped with crisp garlic chips

with the crisp garlic chips.   Dinner was completed by a side of oven roasted vegetables which my wife graciously prepared to accompany the meal.  My wife’s reaction to the dish was “wow the tomato oil sauce really went well with the well cooked/seasoned monkfish and the crisp garlic chips were a great flavor textural match as well”.  So I guess my fish course for the holiday meal is ready to go!

This entry was posted on December 9, 2016, 9:37 pm and is filed under Sakai At Home, ThomasKeller At Home. You can follow any responses to this entry through RSS 2.0. You can leave a response, or trackback from your own site.