So now that I knew how to make apple cider jelly, I decided to make a microbatch of the apple compote for Chef Christina

breaking down the apple for the compote

To make the compote, I needed to put the apples, sugar, cider and cinnamon to a medium saucepan. I then I had to slowly bring the mixture to a boil

Starting to cook down the compote

over medium heat. Once that was done, I had to then strain out the apples and set them aside, reserving the liquid and

cinnamon stick. The cooking liquid had to be reduced by half and then added back to the apples. The compote was finished

Adding in the salt and yuzu juice

with a seasoning of salt and that splash of yuzu juice. 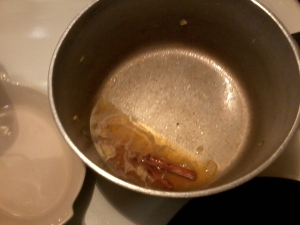 When I had it all ready, I added the apple cider jelly to compote mixture and

mixed to blend all the components well.

Into the mixing bowl with the apple cider jelly and then…. 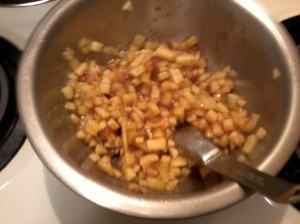 …the hot compote blended in

Before storage I gave my wife a taste and she was surprised how good it turned out.  She was happy it didn’t come across as overly sweet.  I’m looking forward to assembling the dessert this weekend!

This entry was posted on November 12, 2016, 8:26 pm and is filed under DavidChang At Home. You can follow any responses to this entry through RSS 2.0. You can leave a response, or trackback from your own site.