What to do for autumn meal?  I was thinking about going to an old standby – chilean seabass with yuzu soy butter truffle; but I had to remind myself that my wife wasn’t found of heated butter, clarified or other wise.  So I thought I might try Matsuhisa-sama’s Herb Grilled Chilean Seabass, from his Nobu: The Cookbook. The online recipe can be found here: http://recipes.it/japan/japan12.htm

To make the dish, there were 3 basic components, a simple citrus soy, a herb ‘crust’ and the grilled chilean seabass fillet.  The thing about this dish was that there wasn’t a real good sense about how much finely minced parsley leaves were going to be needed for this recipe.  For the sauce, making it would just be mixing equal parts soy sauce and lemon juice (for 2 people, I’d recommend 4 T of each).

For the herb topping, the recipe from Matsuhisa-sama’s book called for 3 T extra virgin olive oil, shichimi togarashi to taste and enough finely chopped parsley leaves to cover the fillets. 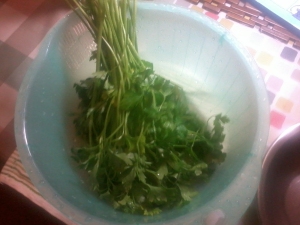 As it would turn out, this amount for 2 people was 1 oz by weight (about 6 tablespoons) from a half-bunch of Whole Foods parsley.

How heavy is the first batch minced parsley?

Some times Murphy’s law gets involved and, I discovered that I was out of togarashi. So I had to improvise and use 1/8 t of Korean 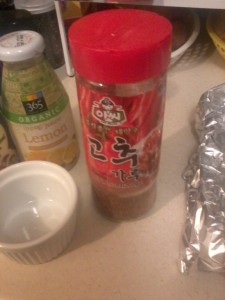 gojugaru in place of togarashi

gojugaru (red chili flakes) which I ground to a powder.

…ground to a  powder

Now it was just a matter of assembling the seasoned herbs to top the fish. So into a mixing bowl, I added the fresh parsley 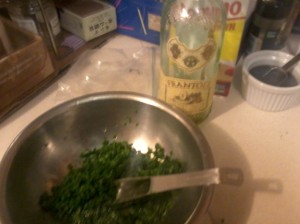 with good extra virgin olive oil (Frantoia) and then the chili powder. 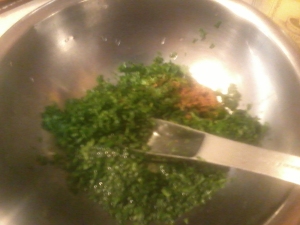 Adding in the chili powder

I set aside the seasoned parsley and prepared the chilean seabass fillets with 4:1 salt/pepper mix.  The fish went into a 475 degree F to roast for 8-10 minutes (so that it’s about 80% cooked through).

I then pulled the fillets from the oven, topped with the parsley, olive oil, chili powder mixture and put it back to cook for 2-3

minutes more without charring the parsley.  Since I was skipping the crisp fried yuba, my wife suggested garlic sauteed cabbage

chiffonade for that crisp vegetable element. Once I got the fish onto the chiffonade bed, I drizzled about 3 tablespoons over the fish. My wife enjoyed about the richness of the fish, the freshness of the herb topping (and warm red chili kick) and the contrast of the lemony brightness of the drizzled sauce.  So perhaps on another night, I can prepare BOTH the herb grilled chilean seabass for her and the yuzu soy butter truffle seabass for me!

This entry was posted on October 22, 2016, 9:33 pm and is filed under Nobu At Home. You can follow any responses to this entry through RSS 2.0. You can leave a response, or trackback from your own site.