With the recent unpredictable weather, I wanted to do something warm and comforting.  Only problem was, I hadn’t had a lot of time recently given the couple of surprises at work.  I’d been eyeing Iron Chef Michiba’s offering on Simply Ming which caused me to raise an eyebrow. Japanese yellowtail (Buri) daikon stew I could wrap my mind around.  I must say the use of curry powder made me really skeptical; but reminding myself of Michiba’s adage that ingredients do not recognize national  boundaries, I convinced myself to give it a go.  What made me skeptical was the strong flavor profile of the curry.  The interesting thing about the documented recipe is that there is no specification for the kind of soy sauce made from fish, even though Chef Tsai mentions it in the video.  The video can be found at:

The online recipe can be found here:

[update: the video and recipe is no longer available at Chef Ming Tsai’s website but the video can still  be found at http://www.michiba-shunsara.jp/mov/ – however my antivirus on my laptop reports the site may contain a trojan malware; however I can apparently play it without problems on my mobile phone. Use at your own risk]

After reviewing the recipe, I scaled it down for my wife and I (Also note that the cut pieces of daikon in the video is considerably thicker than recipe specified 1/4″slices (video time indices 9:40-9:47) – they look more like 1″slices.)…so for now I went with the specified 1/4″ slices. 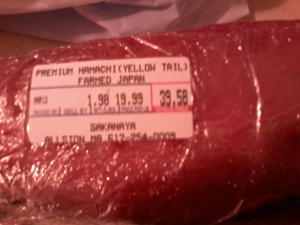 So I went over to Sakanaya and had a chat with Kawamura-san about the buri. Well now, we thought I should be a bit more generous and add MORE buri to the stew. And so I went home with 2 lbs(!) of buri since he didn’t have buri head available. Interestingly, there was no weight specification of the daikon so I had grabbed ~1 lb of daikon from HMart that sort of looked

Nice piece of daikon from HMart for the stew

like the daikon I’d seen in the video.  When I got it home, I washed, peeled the daikon and started slicing it into the 1/4″ rounds.

While I was at HMart, I also grabbed a bottle of Thai fish sauce that had no added MSG in it.

In continuing my preparations, I mixed the seasoning base of soy/tamari/mirin and set it aside

I loaded the daikon slices at the bottom of my pressure just like the video.

Loading the bottom of the pressure cooker with the daikon slices

Turning my attention to the fish, I tried to cut into bite size pieces, first cross cutting it along the length of the fish in about 1″ widths. (I would probably cut some of the bigger pieces in half yet again). 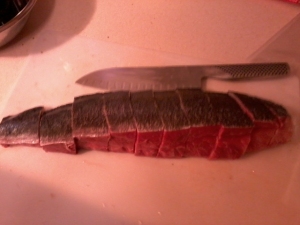 Preparing the buri in to bite size chunks (skin-on!)

While I was cutting the fish, I had started some water to bring it to a boil to echo the shimofuri technique.  Interestingly, the video has the fish ‘blanched’.  Once the water was boiling, I would yank it off the heat, drop in the pieces of fish into the hot

water and then immediately transfer it to a large bowl of ice cold water.

….and then shocking it in ice cold water to stop the cooking

When I finished blanching the fish. I loaded the buri pieces on top of the daikon in the pressure cooker.

loading the chunks of buri on top of the daikon

Moving on to the next stage of preparations, I measure out the fish sauce

getting 1/2 cup of fish sauce ready

and then the sugar 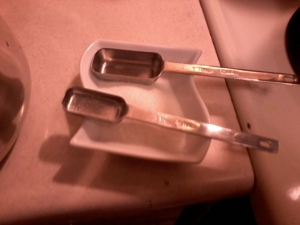 Measuring out the sugar for the braise

and then the curry.

Now it was just a matter of building the braising liquid. 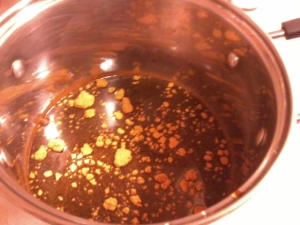 So I built the seasoning base first to make it easy to blend in the rest of the liquid components.

Once I got the curry powder in, I took a little extra time to make sure the powder was whisked in so that I couldn’t see any clumps.

Adding in the dashi…

And now it was easy to incorporate the dashi

bringing the braise to a boil

As I was bringing the braise to a low boil, I made a point of constantly stirring with a wooden spoon until I could no longer feel the graininess of the sugar at the bottom of the braising pot (not the pressure cooker). 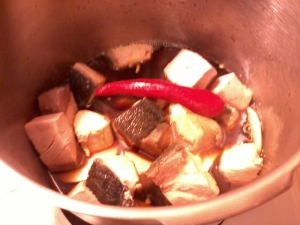 Once the braising the liquid was ready, I poured into the pressure cooker and added a cleaned whole chili pepper to the pot.

all done after pressure cooker run followed by the simmer phase

Then I got the pressure cooked underway, brought it to pressure (2nd ring) and then let that cook for about 10 winutes (since I would be simmering it further).  I released the pressure from the pressure cooker, got the lid off and simmered it on medium low heat (about 30% max power) for about 20 minutes.  My wife volunteered to make blanched baby bok choy to garnish the buri daikon stew.

As I mentioned earlier, I was skeptical on how the stew would taste because of the curry. However, both my wife and I were

really surprised how well the stew turned out.  The curry added a complex subtle spicy profile; not the flavor that was going to overpower the dish.  Actually, my wife and I were startled by how the stew presented itself as a classic Japanese dish. The interesting thing about this dish was how the spicy heat from the curry and chili slowly built up.  The only drawback to this dish was how we noticed that the daikon seemed overseasoned with a bit too much salt.  I think that salt level was offset by the bowl of rice with the meal.  The funny thing was, the fish seemed perfectly seasoned. I don’t know if it was because the daikon was cut too thin (maybe I should have cut the much thicker as it was in the video).  Both my wife liked the dish. I would like to redo this dish again with the thicker daikon and perhaps try to find the Japanese fish shoyu that was mentioned in the video.  Maybe having the fish sauce shoyu would make a difference?  Thank you Chef Tsai and thank you Iron Chef Michiba for sharing this dish and recipe.

One quick question that came just to mind: Iron Chef Michiba – was this a dish you made for the original Iron Chef series that many of us may not have seen – perhaps when you were competing against Kandagawa?

It turns out this dish was created with Buri as the theme ingredient for the battle. I have renamed this article from stew to nimono based on Iron Chef Michiba’s comments referring to this dish as ‘Shaka Simmer’.  By implication, the braising liquid is NOT a stew broth to be drunk, per se, but to be treated as a sauce for the dish. The other interesting thing about this dish is that Iron Chef Michiba garnished this dish with broccoli rabe rather than spinach (as presented to Chef Ming Tsai on his visit to Michiba-sama).

The final piece of information regarding this dish is that the fish sauce that was used in this dish turned out to be “noto ishiri squid sauce” from Michiba-sama’s Ishikawa prefecture (https://www.mtckitchen.com/noto-ishiri-squid-sauce-16-9-fl-oz-500ml/).   I have struck out that use of soy sauce in this dish for this article accordingly.  I am currently using the ayu fish sauce (https://tastingmenu.wordpress.com/2017/09/05/ingredient-alert-ayu-sweetfish-fish-sauce/) that I obtained from Mitsuwa, Edgewater, NJ as a substitute until I can get my hands on the noto ishiri.

This entry was posted on April 4, 2016, 10:16 pm and is filed under Michiba At Home. You can follow any responses to this entry through RSS 2.0. You can leave a response, or trackback from your own site.