In the continuing thread of planning for holiday dinners, I returned to considering other items I wanted to include in my Michiba-inspried opening hors d’oeuvres course.  I already had decided on doing the miso marinated cream cheese.  I’d also thought about including ikura dashi-jiru, maybe a block of spinach ohitashi, and then I came across…Oven-Roasted Portabello With Wasabi Salsa (Nobu’s Vegetarian Cookbook, p.84).   It occurred to me that I could use baby portabellos (bellas) for this receipe. The bellas could be roasted day before and then finished with the hot quick pan sauce before plating. The recipe in the book was for one serving, so I made an estimate that 5 oz of mushrooms would be enough for two people, so I ‘doubled’ the recipe

lemon juice, soy sauce to go along with the pinch (1/8 t) of black pepper, garlic and olive oil 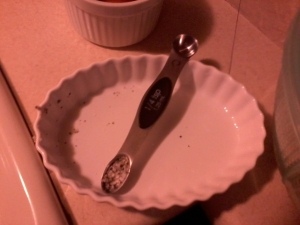 ..salt/pepper to mix into the mushrooms for roasting

Unfortunately, I didn’t have the wasabi greens to make the salsa, so I went ahead and dropped that from the recipe.

about 5 oz of nice sized bellas

So I went ahead and wiped clean the bellas as best I could, trimmed the stems and quartered them.  The bellas were then put into a mixing bowl with the sake, salt/pepper and the hand mixed.   Once I got that done, I spread the bellas onto a non-stick

Ready for the oven

foil lined oven pan, cut side up.  The mushrooms went into a 450 degree F preheated oven for about 10 minutes (original recipe

calls for 430 degrees F).  While the bellas were roasting, I got the garlic ready and mixed up the soy sauce/lemon juice to make

a nice medium clove of garlic

cut up into nice 8 slices

When the roasting was almost done, I carefully preheated my small sautee pan on 50% max heat and added the olive oil. When it got nice and hot I added the garlic slices and waited for that aromatic garlic oil ‘hit’.  I turned the heat down and carefully added the soy/lemon

Preparing the pan sauce for the roasted bellas

seasoning so that it wouldn’t ‘spit/spat’ back at me.   At that point the mushrooms were done and I added them to the pan to

mix in with the ‘sauce’ ingredients.  I must say, I was a bit surprised how much the mushrooms had shrunk.  If I do this recipe

again, I think I’d use the whole 10 oz package of baby bellas. I  guess I shouldn’t have been surprised by the shrinkage of the roasted bellas – presumably the shrinkage resulted from the loss of water from the mushrooms through the roasting process. I realized upon eating a mushroom that  the shrinkage ‘tightened’ up the mushroom so that eating them was similar into biting into cooked meat. Both my wife and I were wonderfully surprised how well this turned out and I’ll probably be making this dish more often.  This is definitely going to be on the holiday 1st course.

This entry was posted on August 9, 2015, 5:58 pm and is filed under Nobu At Home. You can follow any responses to this entry through RSS 2.0. You can leave a response, or trackback from your own site.