Recently, things had been really hard at work trying to get a product out the door.  That meant I really hadn’t had any time to do much creatively in the kitchen.  So I decided to get adventurous and tried Iron Chef Morimoto’s Angry Chicken.  While the recipe can be found on pgs 138,139 of Morimoto: The New Art Of Japanese Cooking, the online version can be found here – http://www.foodnetwork.com/recipes/angry-chicken-recipe.html

Unfortunately, it mentioned a number of spices in unground form, and sometimes folks are in a hurry.  So I took the time to actually hand grind the black peppercorns, cumin/coriander/cardamon seeds into their powdered measurement equivalents. It would turn out that:

To grind down black peppercorns…

…a touch of cayenne chili…

Now there’s the ongoing ‘conversation’ about what garam masala is and what version should be used.  Well, that question had a suggested solution from American’s Test Kitchen/Cooks Country. They selected McCormick Collection Garam Masala (see http://www.cookscountry.com/how_tos/6589-getting-to-know-herb-and-spice-blends )

…and finally some garam masala

So I made the spice mix, moved it into a large mixing bowl with 1 teaspoon of cayenne chili powder, 1/2 teaspoon each of garam  masala and sea salt.  To the spice mix, I dumped a whole bottle of Frank’s hot sauce (12 oz bottle), 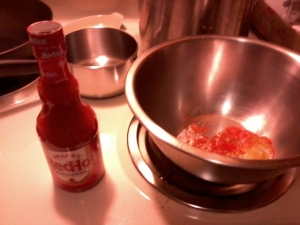 a whole bottle of Frank’s!

Frank’s in the mix (you can see the garam masala and salt peeking out)!

Adding and blending in the yogurt 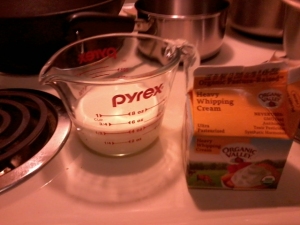 then adding in a half cup of heavy cream 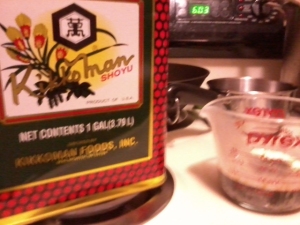 …and finally the soy sauce

spending sometime mixing the whole thing together, I reserved 1 cup of the marinade for use in making the sauce 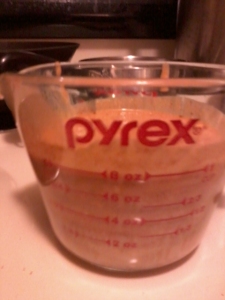 a bit of the marinade in reserve

Immersing the chicken legs with the marinade

refridgerator for a Sunday night’s dinner. But what vegetable side was I going to use with the dish?  Iron Chef Morimoto suggested broiled spicy chili peppers in his cook book. But then I came upon:

which mentioned garnishing the dish with blistered shishito peppers. PERFECT. After 24 hours in the marinade, I preheated my countertop oven to 450 degrees,got a rack ready and then prepared the

Ready for the oven

chicken.  Each piece of chicken, I hand wiped off the excess marinade and placed them on the rack.  I then popped it into the oven for 30 minutes and then ran the oven again for another 10 minutes (yes, yes, yes, the recipe says roast it for 40 minutes).

While the roasting was going on, I got out some homemade chicken stock and reduced it from 2 cups to 1.  When that was done, 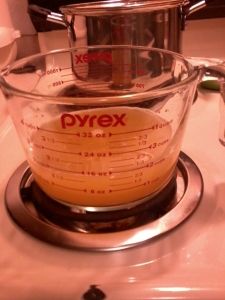 concentrating the chicken stock by half

I took it off the heat and carefully blended in the cup of marinade I had in reserve. 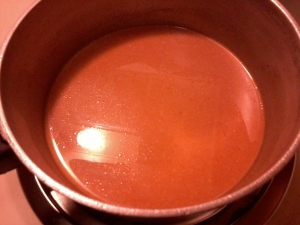 Once the chicken was done, I got it out of the oven to sit for about 5-6 minutes while I quickly broiled some shishito peppers that was tossed in a little olive oil and sprinkled with salt.  Then it was just a matter of getting the chicken onto the plates, garnished with the shishito peppers and then carefully pouring the sauce into the dish.

My wife and I both enjoyed the dish.  It was interesting to note that, as Iron Chef Morimoto said, the roasted chicken was certainly spicy yet not overly so.  However there was a definitely tart tanginess from the sauce that we didn’t get with the chicken alone.  The addition of the shishito peppers gave that unexpected surprise when a few  of them turned out to be really spicy.  We spent some time considering the merits of Nobu’s anticucho and chicken for barbeque relative to this dish. My wife tended to lean towards the anticucho. I found it hard to decide which I liked more in the barbeque context.  To be sure, I definitely preferred either over the timeworn barbeque teriyaki chickens of the past.  I must say though, I think this dish is now easier to make given that I know what the ground spice measurement are relative to the unground amounts.

This entry was posted on April 28, 2015, 10:46 pm and is filed under Morimoto At Home. You can follow any responses to this entry through RSS 2.0. You can leave a response, or trackback from your own site.