So I thought I would do a quick appetizer to go with a SRF Kobe Rib Eye with Balsamic Teriyaki Sauce for Saturday night dinner. The sushi/sashimi area at Wegman’s  Chestnut Hill was offering octopus, ready for sushi/sashimi. So I thought, “great, let’s try octopus tiradito with soy salt”.  So this time, I made soy salt with 25g of maldon salt and 25ml of soy sauce, dried in my countertop oven for 30 minutes.

Once that was all done, I prepared: 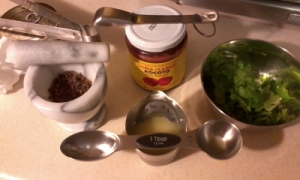 In order to do the appetizer, I got a hold of about 1/4 lb of uncut sashimi octopus from Wehman’s Chestnut Hill which I carefully sliced into thin rounds and 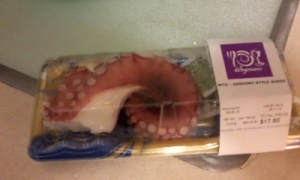 arranged them in the round on a plate.  Once they were on the plated, I gently spooned the lemon/yuzu juice mix over each piece.  Each piece was then covered with a cilantro leaf and a dot of rocoto chili was piped onto each of the cilantro leaves.   All that was left to do was to sprinkle a generous amount of the ground soy salt over each piece. 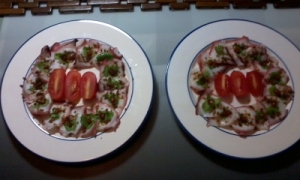 Plating up the soy salt tiradito

Upon tasting the appetizer, I realized the addition of the soy salt added another layer of flavor and textural crunch.  My wife was a little skeptical about the use of the soy salt but she too realized how tasty it was.  I must say that I’m now partial to the soy salt tiradito version. 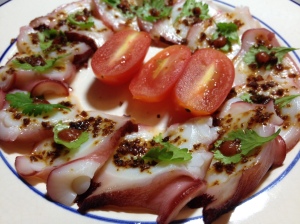 Octopus Tiradito With Soy Salt, up close and personal

This entry was posted on August 9, 2014, 9:12 pm and is filed under Nobu At Home. You can follow any responses to this entry through RSS 2.0. You can leave a response, or trackback from your own site.