So I was thinking about what to make for dinner tonight.  An easy item immediately came to mind – Morimoto’s Red Snapper and Rice.  But then what would I do for a vegetable side for dinner?  I looked about the web and found:

And that’s when I thought, “I can do that!”  It would be just a matter of scoring the eggplant, roasting it at 350 degrees for about 25 minutes and serving it with a dipping sauce of dashi soy and grated ginger!

The dashi soy would be 2 x 5 teaspoons dashi and 1 teaspoon soy (2 tablespoons total/person), and perhaps 1/2 teaspoon of grated ginger on the side.

So employing the eggplant roasting technique I used in previous write ups, I began by splitting then 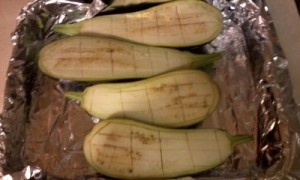 scoring the eggplant halves and placing them into a roasting tray.  I think drizzled some good olive 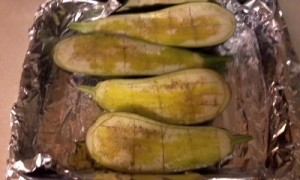 eggplant halves seasoned and ready to be flipped over for roasting

oil on the eggplant halves and seasoned each half with 2-3 3-fingered pinches of 4:1 salt/pepper mix.  At that point, I flipped over the eggplant and popped the tray into a preheated 350 degree F oven.

Once the eggplants were done, I got them out onto their serving plates and took a tablespoon to loosen up to cooked eggplant flesh to make it easy to eat.  Onto each plate, I placed 1/2 teaspoon of grated ginger.  The dish 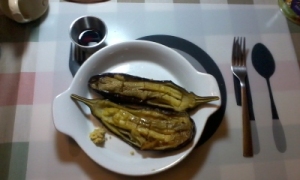 was served with a small dipping cup of the dashi soy.   While the dish didn’t have the extra garnish as in the Nobu Tokyo version, my wife commented how much she liked the flavors, especially after mixing the grated ginger into the dashi soy and dipping pieces of the roasted eggplant into it.  She commented that she wouldn’t mind having this on a regular menu schedule and the Nobu creamy spicy  eggplant version for special occasions!

This entry was posted on April 18, 2014, 10:33 am and is filed under HomeCooking, Morimoto At Home, Nobu At Home. You can follow any responses to this entry through RSS 2.0. You can leave a response, or trackback from your own site.