So my wife was doing a girl’s weekend in NYC for the Mayday show, so I thought this would be a good time to work on something new.  Recently, it’s been really hard to get Bar Harbor lobster stock here in the Boston area. This meant it was time to crack down and make my own.  As the saying goes, “…imitate the best right from the start because that is the only way to learn…“.  And so I decided to make the lobster stock the way Thomas Keller does it. An online exposition of the process can be found here –

Additionally, this time, I would have to breakdown the lobster and not just throw it in a steamer this time. Fortunately, there’s an online video of Top Chef winner Kristen Kish showing how to breakdown a lobster that can be found here:

Now, I wouldn’t be putting the lobster parts into warming containers of court boullion.  I would be using the lobster bodies directly to make the lobster stock.  By the way, if one’s going to be doing things like extracting the meat from the shells, Chef Keller suggests steeping  the lobsters in boiling water with vinegar –

It’s about 1 oz of white distilled vinegar to every 8 cups of water. I’d done this once before a long time ago when I wanted to make his butter poached lobster when I first got Chef Keller’s book. But what about the other lobster parts? Well, I’d be steaming the rest of the lobster parts for dinner.

The recipe itself (The French Laundry Cookbook, p.35) calls for:

lobster bodies for the stock 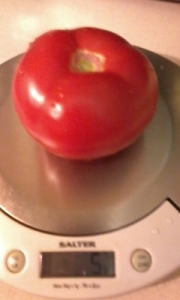 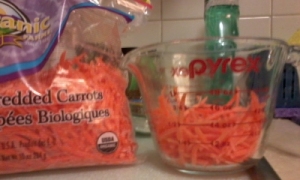 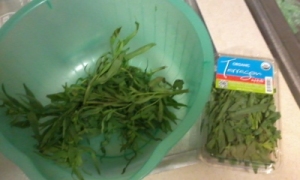 1. Sear the quartered lobster bodies in 1/4 cup of canola oil on medium high heat for 1 or 2 minutes until they turn red.
2. Add tomatoes, carrots, tarragon to the pot and cover everything with water and bring to a boil

everybody in the stock pot!

3. skim off impurities that rise to the top and then simmer over low heat for about an hour
4. strain the stock through a large strainer, smashing the lobster bodies against the sides with a

Straining out the solids

wood spoon the extract all the liquid and then strain again with a chinois into a clean saucepan. 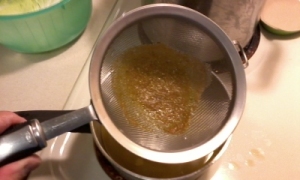 Straining the lobster stock through the chinois

So I discovered a couple of things about the recipe:

1. Getting 12 oz of lobster bodies required 3  1 1/2 lb lobsters –indirectly mentioned in the French Laundry cookbook in the section on Cooking Lobster on p. 124
2. It looks like the amount of tomatoes is 12 oz by weight
3. The amount of water I needed to cover the lobster bodies and vegetables was 8 cups.
4. The yield was 1 quart!

So why the sudden interest in the lobster stock?

Well, I’ve been thinking about doing Chef Ron Siegel’s lobster custard and lobster soup from his Iron Chef battle with Hiroyuki Sakai. Incidentally, Iron Chef: The Official Book (p. 255) indicates that Chef Ron Siegel made lobster stock with 20 lobster bodies, 20 tomatoes and tarragon for that battle. Sounds not unlike the Chef Keller’s version, right (should be no surprise since Chef Siegel was one of the original chefs at the French Laundry when it opened)?

The completed lobster stock, ready for the refridgerator

This entry was posted on March 24, 2014, 11:01 am and is filed under Fundamentals, RonSiegel At Home, ThomasKeller At Home. You can follow any responses to this entry through RSS 2.0. You can leave a response, or trackback from your own site.