During the run of the Iron Chef America series, I’ve seen Iron Chefs Sakai and Morimoto use a sauce called ‘Sauce Americane/Americaine’.  I was intrigued enough that I wanted to try it.  When Iron Chef Morimoto opened his first restaurant in Philadelphia there was an item on the menu:

Since my wife loves arctic char, I thought I’d take a crack at doing the dish. Pan roasting the fish would be the easy part for me; but how to make the sauce? Fortunately, I came across a resource back in 2002 at  http://www.thefreelibrary.com/Masaharu+Morimoto.-a089157440 that described the recipe –

A long gone website (ca. 2002) “www.masterchefrecipes.com” also had a version of this recipe from Iron Chef Morimoto that mentioned the possibility of substituting shrimp/seafood/fish stock though it was noted that lobster stock was preferred.   Shrimp is generally more accessible to most of us so I thought I’d do this sauce using a shrimp shell base.

tomato broth for the lobster/shrimp broth

So I went ahead and did a version of the stock/broth with shrimp shells.

1. In a saute pan, sear the lobster heads/shrimp shells over high heat in the vegetable oil until they turn red, about 3 minutes. Pour in brandy (cognac) and sake, toss and remove from heat.

Shrimp shells after being cooked with sake and cognac 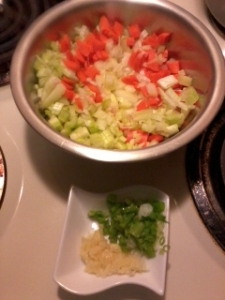 mirepoix, garlic, scallions for the broth base

2. In a large saucepan, saute the mirepoix with garlic and scallion in the remaining oil over medium-high

cooking the vegetables with the shrimp fond.

heat (75% maxpower?) until softened but not brown, about 3 to 5 minutes.  HERE there appears to be an omission in the book regarding the amount of scallions.   Based on the measurements from Iron Chef Morimoto’s Garlic Soy Jus and Scallion Ginger Sauce recipes, 1 small scallion cleaned, derooted and finely minced  should do the trick.

3. Add the sauteed lobster heads/shrimp shells with any juices in the pan, the tomato paste, thyme, bay 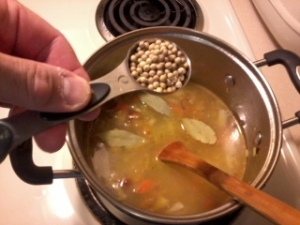 Adding the bay leaves, peppercorns after covering the other vegetables with water

leaves, white peppercorns and enough water to cover (about 4 cups). Bring to a boil, skimming off any

scum that rises to the surface. Reduce the heat and simmer for 1 hour, adding water if needed to keep the ingredients cover.

measuring out 1/3 cup of tomato paste

Simmering the broth for an hour

4. Strain the broth through a fine sieve pressing on the solids to extract as much liquid as possible. Let

straining out the broth’s solids

cool, then cover and refridgerate for up to 3 days or freeze up to 2 months

(by the way: If you can only get dried thyme, here’s the conversion – 6 thyme sprigs==3/4 teaspoon dried thyme  – so for this recipe, it’s 3/8 teaspoon [here’s the reference: http://www.healwithfood.org/substitute/convert-fresh-thyme-dried-ratio.php%5D.  OR if it’s thyme leaves, it’s a ratio of 3 fresh:1 dried). 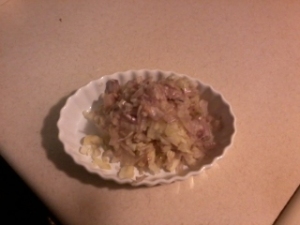 4oz diced shallots for actually making the sauce itself

Going back to the sauce americane recipe – In a saucepan, i heated the oil and sauteed the shallots. 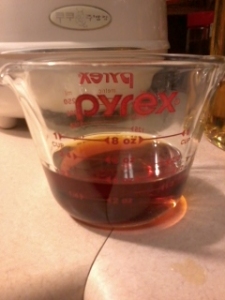 Cognac to be cooked with the shallots

The saucepan was deglazed with the cognac and reduced until almost dry. Then the lobster stock  was added and the whole thing simmered until reduced by 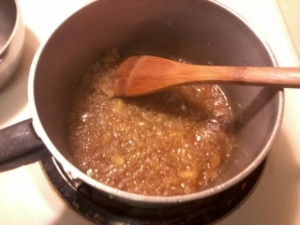 cooking down the shallots with the cognac

Shrimp broth base ready for saucing

…with plenty leftover for another batch! 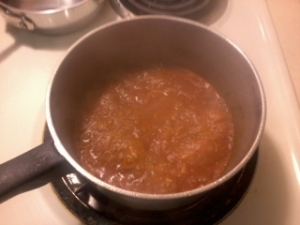 half.  I strained the mixture and added the cream and reduced it slightly one last time. At this point butter was to be whisked in and minced truffles added.  Finally the sauce’s seasoning was to be corrected and 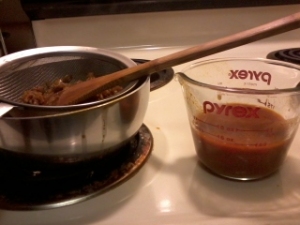 1/3 cup of cream for the sauce

For the version I would be doing, I added 1/4 teaspoon of 4:1 salt/pepper mix, dropped the butter (remember, my wife isn’t really fond of heated butter) and also

the finished sauce (before the truffle oil) 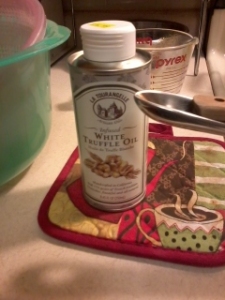 A couple of notes:

“Sauce Americaine” (whatever the spelling) was originally a sauce Provencal from Southern France which used tomatoes (thank you, James Beard). Iron Chef Morimoto apparently relied on pan frying the lobster shells and the tomato paste for the sauce’s redness.  The tomato adds a bit of an acidic edge to the sauce and the use of the cream is used to soften/round the flavor of the sauce.  When adding the cream, pour a little bit in at a time and blend.  The sauce is done when you can put a teaspoon halfway in and the sauce’s nappe’s. 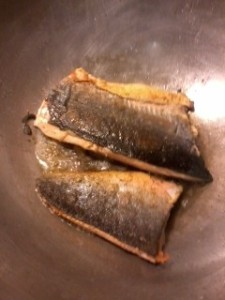 The arctic char fillets, I cooked in the pan with rice oil on medium heat, searing the skin side down first for about 4 minutes (to get the skin nice and crisp) and then flipping the fillets over for a few more minutes.

Maitake to be pan fried and topping the fish as garnish

I set the fish aside to rest while I quickly pan fried the maitake in the same pan with a little bit more rice oil.  The maitake was cooked for about 2 or 3 minutes over high heat. Plating was now just a matter of  placing the roasted asparagus down first, followed by the char and topped with the maitake.  I carefully poured about 4 tablespoons of the sauce into each plate.

My wife commented that the Arctic Char dish with the Morimoto Sauce Americane exceeded her expectations. I think that if I were to do this sauce again, I would reduce the cream from 1/3 cup to 1/4 cup.

This entry was posted on October 9, 2013, 7:47 am and is filed under Morimoto At Home. You can follow any responses to this entry through RSS 2.0. You can leave a response, or trackback from your own site.