Having potsticker (guo tie) dumplings in Lower Manhattan’s Chinatown was just one of those “favorite dish” memories I’d had growing up. Because of a version of that dish which my wife and I recently had at a suburban restaurant (that had a following because of its dim sum reputation), I thought I’d do the same dish with  a recipe from over 30 years ago.

I hadn’t done this dish in a while, so I pulled out that old recipe: 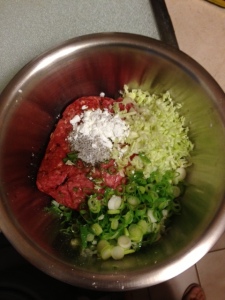 All of the filling ingredients

To make the dough
1. Bring water to a boil. In a large stainless steel bowl, whisk together the flour  and salt. Slowly add the boiling water in 2 oz (1/4 cup) at a time, mixing with chopsticks until a ball is formed and the dough is no longer too hot to handle. All the water may NOT be needed. 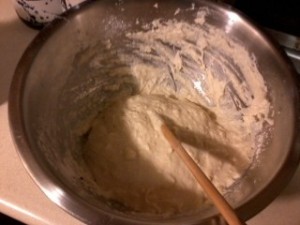 Mixing up the dough

2. Knead the dough on a floured work surface until it becomes smooth and elastic, 15 to 20 minutes.  Use as much extra dustings of flour needed to form the dough into a ball and return it to the bowl,  and cover it with a damp cloth. Allow the dough to rest for 1 hour.

The dough resting under a damp cover

To make the wrappers
3. add flour to the work surface.
4. Divide the dough in half. Shape one portion into a log and roll it back and forth under your palms to make a thin sausage shape measuring about 1-inch  in diameter.
5. Cut log into 1/2-inch pieces. One by one, stand each piece on end, flatten the piece with your palm, and roll out to form a circular wrapper about 3-inches in diameter and 1/16-inch thick. (Be sure to make the edges a little thinner than the center so that when the edges are folded over themselves to enclose the filling, they’ll still be the same thickness as the rest of the wrapper.). Repeat 4 and 5 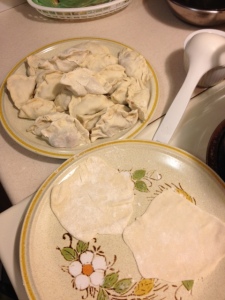 Rolled out skin and completed dumplings

To Assemble
6. To fill the guo tie, place about 1 teaspoon of the filling in the center of each wrapper. Avoid getting filling on the edges of the  wrapper, which would prevent proper sealing. Fold each wrapper in half  to form a half-moon shape.  I usually dip my finger in a cup of water and run my fingertip around one half of the wrapper’s edge to help with the sealing process.  Then seal the top  enter of each dumpling by pressing between the fingers and, starting at the center, make ~3 pleats, working  toward the bottom right.  Repeat, working toward the bottom left corner.  Press the dumplings down gently on the work surface to flatten the bottoms.

To Cook:
7. Heat a large FLAT skillet over medium heat. Add the oil (I use rice oil these days – about 2 tbls) and  swirl to coat. It’s sort of important to use a high temperature oil like canola, grapeseed or rice oil so that you can achieve that nicing crisping on the bottom of the dumplings.
8. When the oil shimmers,  add the guo tie, flattened bottoms down, in rows of five (you probably are going to have 2 or 3 rows), and cook in batches  without disturbing until brown, about 6 minutes. 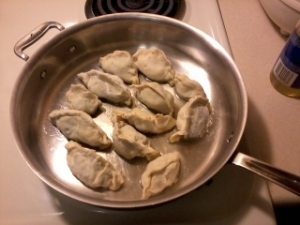 Into the pan the dumplings go!

9. Add about 1/2 cup of water and immediately cover to avoid splattering.
10. When the sound of the splattering stops, lift the cover and make sure about 1/8-inch of water remains in the pan; if not, add a bit more.  Steam until the guo tie are puffy yet firm and the water has 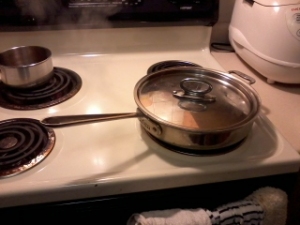 ‘steaming’ the dumplings so that they cook through

evaporated, 6 to 8 minutes. If the water evaporates before the guo tie are done, add more in 1/4-cup increments.  If the guo tie seem done but water remains in the pan, drain it and return the pan to the stove top.
11. Continue to cook over high heat to allow the guo tie to re-crisp on the bottom, 2 to 3 minutes. Serve right away

Dumplings are done, served bottom side up to show the crisping

This recipe made about 34 dumplings with about quarter of the dough leftover (I’m planning to make scallion pancakes with the leftover dough at a later time).

As I’d mentioned earlier, it’d been a while since I made these from scratch.  Having these potstickers again this past Sunday night reminded me how much I like this recipe.  I was happy that the seasoning of the dumplings were such that I felt that  they really didn’t need any dip.  My wife was pretty happy with the dish as well, and I think she gained quite a respect for those who make these from scratch.  I’ve yet to find dumpling wrappers in stores that match the traditional ones found in decent Chinese restaurants.

This entry was posted on August 7, 2013, 7:14 pm and is filed under HomeCooking. You can follow any responses to this entry through RSS 2.0. You can leave a response, or trackback from your own site.