So my wife was making Sunday night dinner and she asked me to come up with an appetizer.  We had chinese eggplant (“nasu” in Japanese).  So I thought “great!  I’ve got kinzanji moromi miso, so why not do the very first recipe from Nobu Miami: The Party Cookbook – Baked Eggplant With Kinzanji Miso?” (an online version of the recipe can be found here – http://blog.cleveland.com/pdextra/2008/12/eggplant_brings_a_touch_of.html )

An important observation is that the cut pieces of eggplant are placed in water so as not to discolor.  And while it’s been mentioned that eggplant soaks up oil when it’s deep fried, I imagine the eggplant would also soak up the water.  That being said, it’s not to far a stretch to think that while the eggplant is baking/roasting in the over, the eggplant is being cooked on the inside with the soaked-up water being heated up.

One other thing – while Nobu indicates a recipe for sake soy (2/3 cup (5 1/3 oz) of nikiri sake with 5 tablespoons of soy), it’s a lot for this recipe.   It turned out that I only needed a little more than an

ounce of the sake soy to dab atop the eggplant pieces.   It’s not hard to see that 1/5th of that amount is virtually 2 tablespoons of sake/tablespoon of soy) – and that’s exactly what I used.

So I began by preparing two moderate sized chinese eggplants (they call this ‘nasu’ in Japanese, and this is what you want to use for this dish), cleaned it, trimmed off the stemcap and then ends.  The eggplant was then cut into ~1″ pieces and placed into water.  In this instance, I deliberately left them in water for about an hour.

While the recipe calls for using a 380 degree oven, I didn’t have such a setting and so from prior experience, I preheated the oven for 400 degrees F. After lining a cooking tray with non-stick aluminum foil and having the oven good and hot, I transferred each eggplant piece to the cooking tray (blotting them dry with a paper towel).  The eggplant pieces were first dabbed with a drop or two of sake from a teaspoon and then I dabbed each piece with a drop or two of the sake soy.  The 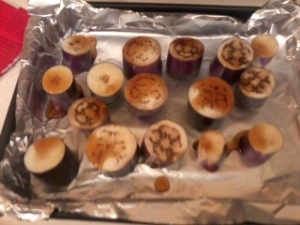 cooking tray was placed into the oven for about 15 minutes to bake/roast.  At the end of that time, I opened a package of the kinzanji moromi miso and dabbed about 1/2 teaspoon of the miso on top of

each of the eggplant pieces and returned the tray to the oven to cook for about 4 more minutes.

While making this item, I thought that using the non-stick aluminum foil would make it easy to move these cut pieces of eggplant from baking/roasting pan to the plate.  Wrong.  When I tried to move them, a number of the eggplant pieces actually stuck.  In the future, I’m simply going to use the regular aluminum foil and make sure it’s got a good wipe of cooking oil across the surface.

I didn’t have fresh oranges (for orange zest) nor sesame seeds at home this time to garnish the eggplant as per the recipe, but my wife and both enjoyed the appetizer all the same.  She commented on the salty-bite of the miso; but I think that would be a good reason to take a drink of a pre-meal beverage and have another bite of an appetizer! When I do this recipe again, I think I’ll make sure to add the orange zest to offset the powerful miso flavor profile. 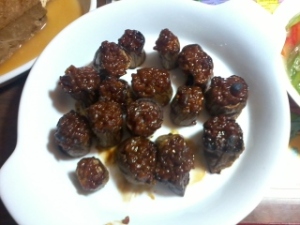 This entry was posted on May 8, 2012, 10:03 am and is filed under Nobu At Home. You can follow any responses to this entry through RSS 2.0. You can leave a response, or trackback from your own site.