I thought I’d do another Nishino dish this weekend for dinner.  Looking over Nishino’s Autumn Omakase internet book (see: http://www.tastingmenu.com/autumnomakase/B889FA42C4E021AAEE978D1/Autumn%20Omakase%20from%20Tatsu%20Nishino%20and%20tastingmenu.publishing.pdf ), I thought I’d try doing his yellowtail with balsamic teriyaki.  Actually, the name of the dish is a little bit of misnomer, since it’s yellowtail teriyaki on braised daikon, with lotus root (renkon) chips and balsamic reduction.  In truth, the dish had three major components – the pan-seared yellowtail fillet, the braised daikon, and deep fried (su-age) lotus root (renkon) chips.

In order to make the dish, I started a day ahead and made the balsamic reduction which was just a cup of balsamic vinegar, brought to a boil, then reduced to a simmer for about 30 minutes until it was reduced to about 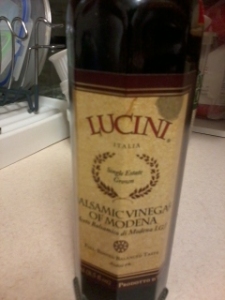 1/4 of its total volume.  The interesting thing about the reduction (and Nishino-san himself comments on the matter), after storage in the refridgerator overnight, “…If the balsamic reduction has cooled heat it gently using adouble boiler technique by placing a bowl of the sauce in a pot of boiling water for a few minutes to heat it up and help make it more fluid.” 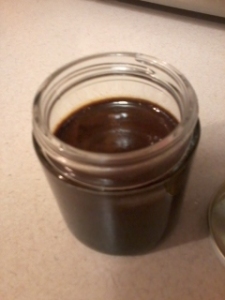 I found it was enough to place the glass container the reduction was stored in a large bowl of boiling water to loosen the reduction.

The next items I needed to take care of preparing the vegetable components.  For the renkon, I needed to peel a renkon and then run it on my mandolin to get paper thin slices.  The cut ‘chips’ were set aside for later.  For the

daikon,  I took a little more than 4″ of the top portion of the daikon after cutting off the stem.   I then did an initial peel of the daikon and then cut it into about 1″ thick rings.  Once I had the rings, you could see the opaque white outer layer – this later I also peeled – this is presumably the tougher outer fibrous later that Nishino mentioned in the recipe.  It address the ‘bevelling’ issue, I used the peeler the ’round off’ the edges of the daikon rings.

Once the daikon was prepared, a pot with about 4 cups of water was brought to a boil, lowered to 50% power and 2 teaspoons of sushi rice and the daikon was added to cook for about 15 minutes.  When that was done the daikon was retrieved, rinsed and the water with the rice was discarded.

2 cups of dashi and 1/2 teaspoon of salt was combined (hmmm – sounds like 1/4 teaspoon of salt per cup of liquid) and warmed at 50% power and the daikon was transferred into the salted dashi to braise for 30 minutes. 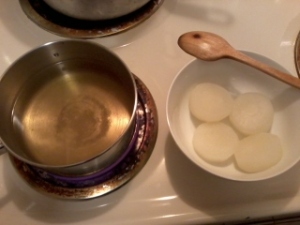 While the daikon was being braised, I measured out the seasoning for the teriyaki glazing sauce, combined them and then moved on to grating some peeled ginger whose ‘pinched-squeezed’ juice would be finishing the dish. 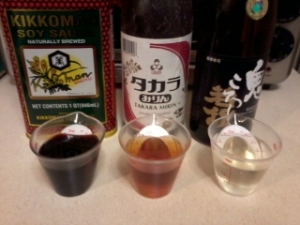 Measured out ingredients for the teriyaki sauce

At this point I still had a some time, so I poured out some rice oil into a small sauce pan, and heated it  to about 60% power and when I felt it was hot enough, I began deep frying the renkon chips 3 or 4 at a time. I didn’t use a lot of oil since the chips were super thin from going through the mandolin.  I watched the renkon for abotu 2 to 3 minutes and I noticed that I could consider them done after 2 minutes when the chips quit bubbling/sizzling in the hot oil.  As each batch of chips were finished, I moved them off to a plate topped with a paper towel to drain.  The chips were sprinkled with some sea salt.

Deep frying the renkon chips at about 60% max power

The one thing I did notice that appeared to be omitted from the instructions for this dish was that the yellowtail was not seasoned with salt/pepper before it was placed into the pan to sear.  I’m guessing this was a typo/oversight, so I went ahead and seasoned the fish with the 4:1 salt/pepper mix.  Into a hot pan, I added rice oil rather than the canola oil that is called for in the recipe.  I cooked the fish for 2 minutes a side, pulled the fish out so I could clear the pan of oil and then added the teriyaki glazing sauce to the pan to reduce a little bit.  At that point I returned the fish to the pan to coat it with the sauce.

I’d forgotten to get scallions at market and didn’t have any chives, so I thought I’d finish the dish with blanched green beans to add another vegetable and more color to the dish.  So as I plated the daikon, I carefully cut a cross (top to bottom) into each piece of daikon and placed two daikon discs onto the plate.  The green beans flanked the daikon and then the hamachi was placed atop the daikon.   A large pinch of the grated ginger was squeezed for its juice  over the fish and a teaspoon of the balsamic reduction was drizzled over the hamachi.  I finished each dish by bookending the hamachi with a pairs of renkon chips. All in all, it was a nice meal to end the weekend! 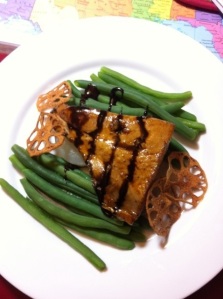 This entry was posted on February 14, 2012, 3:03 pm and is filed under Nishino At Home. You can follow any responses to this entry through RSS 2.0. You can leave a response, or trackback from your own site.