So one of the courses for this past Thanksgiving was fresh steamed lobster.  Originally, I wanted to repeat the lobster with Nobu dipping sauces dish that I did for this past 4th of July.  Unfortunately, my father was unable to consume anything spicy or sour per se, so all those sauces from that meal had to be dropped.   Fortunately, Nobu West had a lobster dish (Lobster And Watercress Salad With Watercress Dressing).  Since I had never done the watercress dressing before, I thought I’d make a go of it.  Interestingly enough, the recipe called for separating the leaves from the stems, puree’ing the stems with the rest of the dressing ingredients (less the oil).  Doing the leaves/stem separation process was sort of deja vu to the Ron Siegel dish I had done a few weeks after the 4th of July meal.

One bunch of Whole Foods watercress with the leaves stripped

The online recipe for the watercress dressing can be found here –

The other sauce I thought I’d offer was the Nobu Yuzu Dressing (to see if my father could handle the sour/tartness of that sauce). So I began by preparing the watercress (separating the leaves from the stems), blanching the stems, and then chopping them up for the food processor. 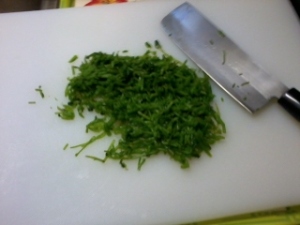 Rough chop of the blanched stems intended for the food processor

I then measured out the seasoning ingredients (salt, pepper, rice vinegar)

and then loaded the chopped watercress stems and seasoning ingredients into the food processor.

Dressing ingredients (less the oil) loaded into the food processor

The final step was to unload the processor and then mix in the grapeseed oil.

With the sauce done, I proceeded to steam 4 lobsters (much as I had done for the 4th of July meal) for about 13 minutes and brought it to the table in a large pot with the lobsters ‘standing tall’ –

So everyone at dinner got a lobster  and a dipping cup each of the yuzu and watercress dressings.  My wife helped out by cooking up a family style side dish of sauteed peas and shredded carrots. My father was pleasantly surprised that he was able enjoy this Nobu-style dish.  And as it would turn out, it appeared my father was ok with the yuzu dressing as a dipping sauce.

This entry was posted on December 16, 2011, 9:23 am and is filed under Nobu At Home. You can follow any responses to this entry through RSS 2.0. You can leave a response, or trackback from your own site.