One of the recipes I’ve been wanting to try for a while is the miso-citrus (or more precisely, miso-ponzu) marinated roasted chicken from Ming Tsai’s Simply Ming (see http://ming.com/foodandwine/recipes/season-1/roasted-miso-citrus-chicken.htm ).  Obviously, it’s important to make the marinade for the dish; the online recipe for the marinade can be found at:

The only change I made to marinade recipe is to peel/grate the ginger rather than peel and mince it. 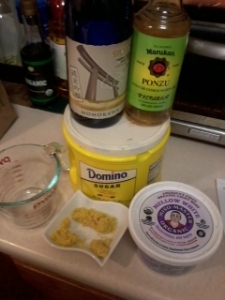 It’s actually quite a lot of marinade, so I decided to make a half-batch.

Allocating the sugar (I supposed I could’ve substituted in honey…)

Flitering in the miso to the sake, pozu (no soy), sigar mix 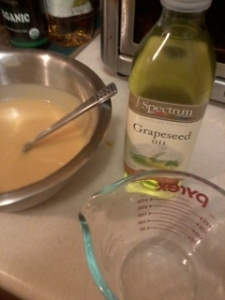 ,,,and adding in the oil to the marinade

Instead of dealing with a whole 5-7 lb chicken, I thought it would be quicker and easier to use 2 lbs of chicken thighs (7 pieces, skin on, bone-in) and I placed them into a container with 10 tablespoons (~5 oz) of the marinade.  While the original recipe called for marinating a whole chicken overnight, I thought I’d leave the chicken thighs to marinate for two days (sort of like Nobu leaving the black cod in his famous miso marinade for 3 days). 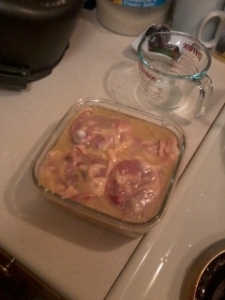 chicken thighs into the marinade for two days…

Normally I roast chicken thighs at 450 degrees F for about 30 minutes; but with the miso marinade, I thought I’d roast them at that temperature for 15 minutes and then tent the chicken with foil and then finish cooking them for the remainder of the cooking time. So I took out the chicken from the marinade, tried as best I could to wipe off the excess marinade and got them onto the roasting rack…. and into the oven they went. 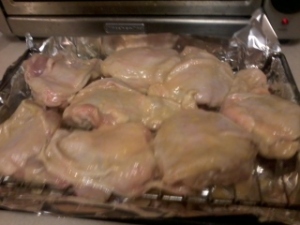 Chicken out the marinade and prepared for the oven

After 15 minutes had elapsed, I extracted the roasting tray and lightly placed a sheet of foil over the chicken and returned them to the oven to finish cooking.  My wife graciously contributed a stir fry of cabbage chiffonade and carrots to pair with the roasted chicken thighs. 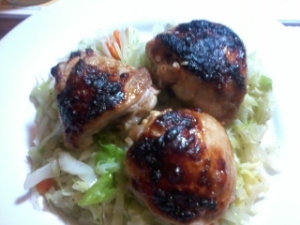 For this recipe, I thought I would try to use an American-made miso to see how this recipe would turn out.  I was surprised to find that it wasn’t as salty as I expected it to be and that the ginger flavor was more pronounced – perhaps because the miso wasn’t quite as salty.

I’ve got plenty of miso marinade left, so I’ll be making a Chef Tsai’s Broiled Miso-Citrus Salmon (also from Simply Ming) in a donburi-style to take to work as lunch this week.   The recipe for that dish can be found online at: http://ming.com/foodandwine/recipes/season-1/broiled-miso-citrus-salmon.htm .  Although the salmon pieces I have at home are skinless, I’m sure it’ll work out just fine.

I remade this dish using the Yamajirushi miso used in making Nobu’s Black Cod Miso.  As I mentioned in the initial write up, the chicken wasn’t quite as salty as I had expected and the miso presence wasn’t as strong.  With the Yamajirushi miso, I got the “miso hit” I’d been expecting vis-a-vis my experience with the black cod miso.  My wife commented that the miso, this time, penetrated deeply into the protein and seemed to balance out the ginger flavor in the marinade. I guess, I think I’ll use the Yamajirushi for my miso preparations from now on…..

This entry was posted on November 7, 2011, 1:14 pm and is filed under MingTsai At Home. You can follow any responses to this entry through RSS 2.0. You can leave a response, or trackback from your own site.