While my wife was on her way home from Asia (she was accompanying my mother-in-law back to her home in Asia), I thought it might be nice to do a dish from Nobu: The Cookbook.The dish I chose to do was the chilean seabass version of “Freshwater Eel And Foie Gras” (p. 138).  It was a dish I was served during my omakase meal on 26 Dec 2004.  The dish featured a soy mirin reduction with a little truffle oil mixed in.  The soy/mirin ratio for the sauce is 1:3.  I also noticed that Nobu Dallas was currently featuring a “Seared Chilean Sea Bass with Truffle Mirin & Soy ” on its hot dishes menu (as of this writing).  Nobu Las Vegas apparently has a version of the same dish (an online picture can be found at http://www.flickr.com/photos/jaymeshimamura/3387527423/in/set-721576121 ).  Interestingly, it appears that  neither Dallas nor Las Vegas features the foie gras. I did have one disappointment when I was trying to gather ingredients to make this dish tonight –  there was no daikon to be had at Whole Foods Newton/Newtonville.  So I decided to  do the dish with just the shiitake and blanched bok choy (much like Nobu Las Vegas).

I began the preparations by lightly broiling the shiitake (as I have in past writeups here) and blanching some baby bok choy. 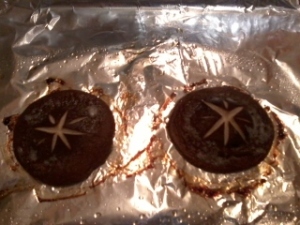 Broiled shiitake for the dish 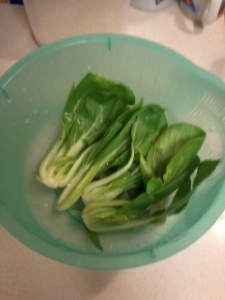 Instead of pan roasting the chilean seabass, I chose to roast 1/2 lb of the chilean seabass fillet the same way as I did for the Nobu chilean seabass and truffles with yuzu soy butter sauce (475 degrees for about 15 minutes).  But how much sauce to make?  The original recipe calls for 12 oz of mirin and 4 oz of soy for 4 servings (about 4 oz/person). 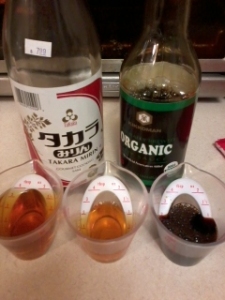 mirin and soy for the sauce 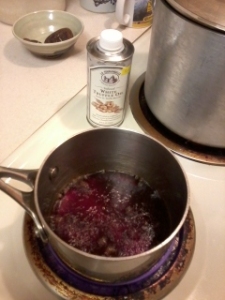 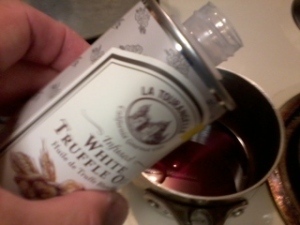 adding the truffle component to the sauce

As per the original recipe, I added a couple drops of truffle oil and stirred it into the reduction.  After the addition of the truffle oil, the two broiled shiitake caps were added to the reduction and I made sure they were well coated and starting plating.  Onto the plate went the blanched baby bok choy, the roasted chilean seabass fillet and then the shiitake caps. 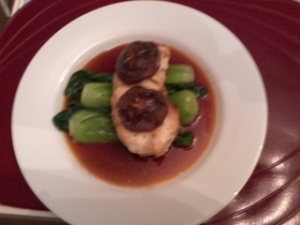 The flavors of the finished dish turned out very much like what I was served at Matsuhisa, LA during my omakase meal.  I can’t get cross-country to Matsuhisa, LA often, so it’s nice to know that it’s possible to do some of these dishes at home and have them taste very close to what is made at the restaurant.

This entry was posted on September 3, 2011, 9:34 pm and is filed under Nobu At Home. You can follow any responses to this entry through RSS 2.0. You can leave a response, or trackback from your own site.