William Mark’s The Chinese Gourmet lists a recipe for Crab And Corn Soup (which I presume is Cantonese-style), that calls for a can of creamed corn for the soup. Well, Del Monte claims that its version of creamed corn contains only Corn,Water, Sugar, Modified Food Starch (Corn), Salt (see http://www.delmonte.com/Products/detail.aspx?id=177&c=214.214.243).  So I thought I could improve the recipe by using a corn puree to provide a fresh intensified corn flavor (see Chef Thomas Keller’s comment on amuse-guele/appetizer/canape soup – http://books.google.com/books?id=GpQC3JkSe5oC&lpg=PP1&pg=PA31#v=onepage&q&f=false ).

Assuming Mark’s book refers to the 14.75 oz can of creamed corn in the recipe, how much of the corn kernels would I need?  Thomas Keller’s recipe for “Puree Of English Pea Soup” ( http://books.google.com/books?id=mk7t2MNQBbUC&lpg=PA37&ots=QmRVxqhwur&dq=french%20laundry%20english%20pea%20soup&pg=PA37#v=onepage&q&f=false ) suggests that I estimate what I need at 3 lbs of corn kernels; that should hopefully should reduce to 2 cups 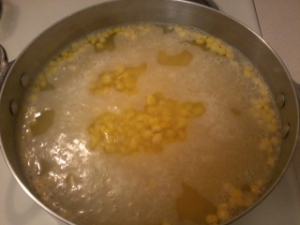 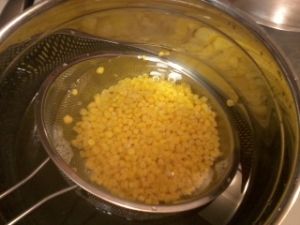 of puree (“reasonably” close to ~15 oz).  As it would turn out, I did indeed need 3 lbs of yellow sweet yellow corn kernels to make 16 oz of corn puree. 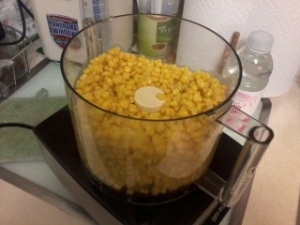 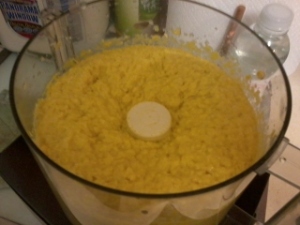 Puree’ing the corn through a tamis is not for the faint of heart.  As I discovered, it took a lot of 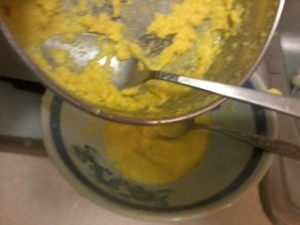 Passing the corn puree through the tamis

patience, endurance and muscle.  I must say this is one of those times I count myself lucky training martial arts.  The arm and hand strength and stamina paid off when undertaking the puree’ing process. 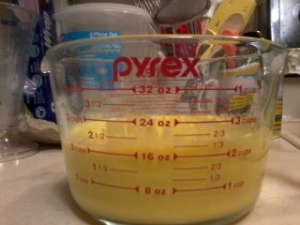 3lbs of corn kernels into 16 oz of corn puree

The question now was, how much Chinese superior broth would I need?  Would I need the 3 cups as specified in his recipe (it calls for secondary broth), or could I use less to get enough of the umami impact? Since the version of the superior broth I was using was made using the Niman Ranch Jambon Royale, I had to add about 1 1/2 teaspoons of sea salt (I probably would not have added any salt if I had made the superior broth using the smithfield ham) at the end to correct the seasoning. I then heated the soup at 50% max power and stirred it periodically so nothing would burn or stick to the bottom of the pot.  The heating of the soup continued until it was clear the soup reached a steady simmer for about 5 minutes. 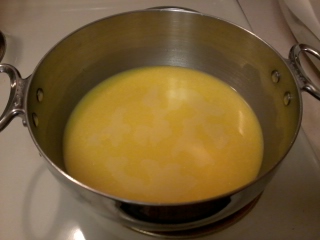 Corn puree combined with the broth

I then added about 6-7 oz of jonah crabmeat that I purchased at Whole Foods. The soup was then finished with 1 large beaten egg that was poured into the heated soup and then whisked in.  The finished soup had the flavor and thickness I expected of the dish.  If I had to do it 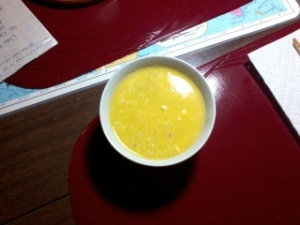 1 serving of the crab corn soup

all over again, I imagine I’d reduce the 3 cups of the superior broth on the stove to 3/4 cups instead.  I’d also probably garnish the dish with finely minced chives.

This entry was posted on July 20, 2011, 2:19 pm and is filed under HomeCooking, ThomasKeller At Home. You can follow any responses to this entry through RSS 2.0. You can leave a response, or trackback from your own site.