This is a dish I do as consequence of making Chinese superior broth (see https://tastingmenu.wordpress.com/2010/11/25/on-chinese-superior-broth-%E9%AB%98%E6%B9%AF%E4%B8%8A%E6%B9%AF/).  It’s driven by the response of “what do I do with the chicken used to make the broth?”   Looking at William Mark’s book, The Chinese Gourmet cookbook, the recipe for Drunken Chicken on p. 137 very closely resembles the preparation for Chinese Superior broth, less the pork products.  So what I do is simply make his marinade recipe and then add it to the 1 lb of chicken wings I used to make the the chinese superior broth.

Since it’s virtually impossible to find chinese rice wine in the Boston area that DOESN’T have added salt, I’ve switched to using Japanese sake. But I have found that marinade usually isn’t enough to cover/submerge the chicken.  I didn’t want to increase the amount of the marinade for fear of ‘only tasting the rice wine/sake’.  So I chose to up the umami in this dish by adding chinese superior broth that resulted from the chicken used to make it. So the marinade recipe becomes –

…and as per William Mark’s instructions, I let the chicken soak in the marinade for at least 16 hours. 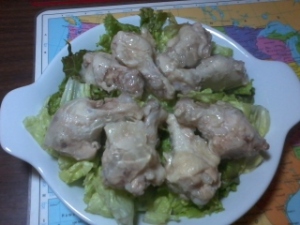 As an appetizer - chinese drunken chicken on mixed greens

This entry was posted on March 22, 2011, 2:32 pm and is filed under HomeCooking. You can follow any responses to this entry through RSS 2.0. You can leave a response, or trackback from your own site.