Back on 15 May 2008, I came across an online article ( http://www.womguide.com/meet-your-maker-nobu-matsuhisa ).  In it, they had a recipe for Nobu Hong Kong’s ‘Spiny Lobster And Tamari Sichuan Soy”. The recipe called for 4 spiny lobster tails at 300 grams (~10.5 oz each), 1 large green sweet chili pepper, 1 large red sweet chili pepper,  2 bunches of scallions thinly sliced, 4 tablespoons (all purpose?) flour; the sauce called for  100 ml each of tamari and rice vinegar (~3.38 oz) and 20g of whole szechuan peppercorns (on my salter scale that came to ~5/8 oz).  10g of the peppercorns measured out to about 12.5 teaspoons. 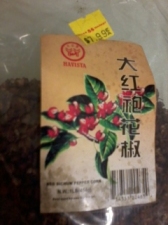 Szechuan Peppercorns measured out for sauce

Rice Vinegar measured out for sauce

Tamari measured out into sauce

Since the recipe served four, I decided to make 2 servings (for my wife and I). So I measured out 3 tablespoons+1 teaspoon each of tamari and rice vinegar and about 4 tablespoons of the szechuan peppercorns, mixed them together and set them aside overnight.  The original recipe warned that the sauce was intense; when mixing it with the cooked ingredients in a bowl, it warned not to plate any of the remaining sauce from the mixing bowl.  When I made this for my wife the first time, she also commented on the intensity of the sauce, so I thinned it out by adding 1 tablespoon of water.  That seemed to do the trick. 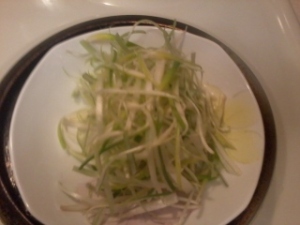 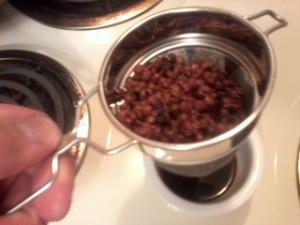 I don’t always have time to do this dish with fresh lobster; but I have done this with both medallions of  monkfish tail and shimp.  So since I couldn’t get my hands on any monkfish, I picked about about a pound of peeled/deveined shrimp from Whole Foods, cleaned them and removed their remaining tail shells.  I then seasoned them with my 4:1 salt/pepper mix.

Since the original recipe called for dusting the seafood with flour, I decided to take a shortcut and put 6 tablespoons (not the 4 as specified in the recipe) into a plastic bag.  I coated the shrimp using a shake-and-bake method (thank you, Alton Brown).

So I heated my wok, added the olive oil, swirled the oil around and added the shrimp.  I cooked the shrimp for about 1 to 2 minutes aside, making sure the coating was nice and crisp before turning them over.  I was using about 60% maximum power on the heat. 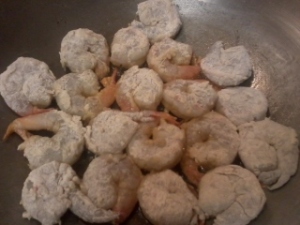 Shrimp into a hot wok with olive oil

In the original recipe, the instructions say to leave the shrimp in the pan and add the sweet chili peppers to cook.  Having done this dish before, I’ve found that it tends to make the coating really soggy.  So, I added a step to set the shrimp aside in a mixing bowl while I’m cooking the peppers in the same pan I used to cook the shrimp. As you can see from the next picture, you can see a bit of the liquid exuded from the peppers making the pan’s contents glisten.  I found it was enough to cook the peppers at about 60% maximum power for about 5 minutes.

Sautee’ing the peppers for about 5 minutes

Adding in the cooked cubanelles 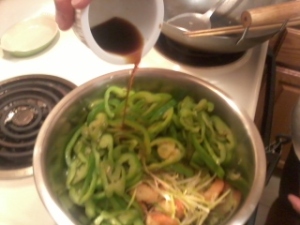 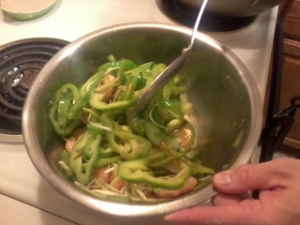 Tossing the cooked ingredients with the Sichuan Tamari Soy 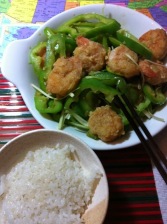 This entry was posted on February 25, 2011, 10:09 am and is filed under Nobu At Home. You can follow any responses to this entry through RSS 2.0. You can leave a response, or trackback from your own site.