It goes without saying that this miso is crucial to Nobu’s famous black cod signature dish. It was also crucial to one of the omakase dishes that Matsuhisa-san himself served to my-now wife and I during our engagement dinner – the toro ‘steak’ with nori karashi su miso sauce.  It’s probably one of my wife’s favorite dishes from Matsuhisa.  I make that dish for her every memorial day weekend – our engagement anniversary.

So – how to make the miso?  Well, of course, there’s the well publicized recipe.  But as I have discovered, there are several twists behind the dish.  To begin, when I first tried the recipe, I began by asking the question – what if there’s no sugar? My immediate reaction was to reach for honey.  Honey was an ingredient that I thought about when I attempted to make my own version of a teriyaki marinade (soy, garlic, sesame seed oil, honey) – when I was a teenager back in the 70’s – but that’s a story for another time.  But it was important to note that honey had far more sweetening power than sugar.   So how much honey to use relative to the sugar?  As it would turn out, honey apparently has 140% the sweetening power of sugar [http://www.purezing.com/living/food_articles/living_articles_honeysugar.htm].  So since I usually make half-size amount of the Nobu recipe for the miso, it called for 5 oz of sugar; multiply that by 100/140 (inverse of 140%) and all I really needed to use was ~3.57 oz of honey. So as not to make the miso overly sweet, I rounded down to 3.5oz (or about 7 tablespoons) of honey. Sometime around late 2006 actual imported saikyo miso became available at Mitsuwa, NJ – and I discovered that the imported saikyo miso used millet jelly as its sweetening agent. So I suppose my intuitive guess to reach for the honey was not far off the mark. (Side note: my mother feels the imported saikyo miso is far too sweet and prefers the Nobu-Style version more).

There was another surprise I ran into regarding the Nobu-Style Saikyo Miso.  Until recently, I didn’t have access to Yamajirushi miso as cited in Nobu’s cookbooks.  So I had to use whatever shiro (white) miso was available at market.  I originally started making Nobu’s miso by simply following the instructions.  However, I discovered that occasionally the miso, when used as a sauce, periodically left a chalky-like aftertaste.   I then learned that Ming Tsai (of Blue Ginger fame) filtered his miso while making miso soup.  In a conversation with Chef Tsai during the 2010 New Years Eve dinner, I confirmed with him that if you use miso in marinade, you don’t have to worry about filtering the miso for the marinade because you are going to wipe off the miso before cooking. HOWEVER, if you are going to use it in something like a soup (for example) you want to filter it otherwise you’re going to get lots of tiny fiber from the miso on your palate [see”Simply Ming’, pg 205 – ‘Miso Soup With Tofu And Nori’.]  Once I applied that filtering technique, that occasional chalky aftertaste went away.  On looking at the filter contents at the end of the sake/mirin/miso blending process, I saw quite a bit of plant fiber – something in the miso I attributed to causing that chalky aftertaste.

Filtering In Miso To Sake And Mirin

Getting ready to add more miso 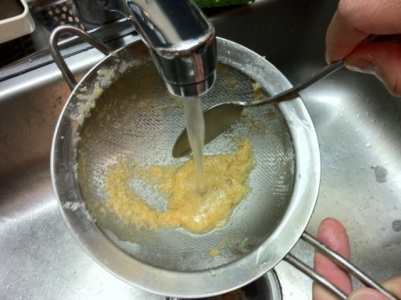 It’s my opinion that the recipe for the miso in Nobu: The Cookbook has a misprint (omission).  The online copy of the recipe can be found here –

The omission is the amount of sake used for the recipe.  After consulting Nobu Now and Nobu West, both books are in agreement that the recipe requires equal parts of sake and mirin. SO: the miso ingredients list should appear as

As a result, a 1/2 portion of the recipe would be:

ny.eater.com ( http://ny.eater.com/archives/2012/03/nobus_infamous_black_cod_with_miso.php ) reports that, while black cod with miso was a traditional Japanese dish, it became a signature item for Matsuhisa because of its increased level of sweetness. Among other things, the black cod miso is finished with an extra drizzle of miso before serving. It also begs the question of how much more sugar is in the recipe compared to a traditional formulation using millet jelly.

This entry was posted on January 1, 2011, 5:10 pm and is filed under Nobu At Home. You can follow any responses to this entry through RSS 2.0. You can leave a response, or trackback from your own site.